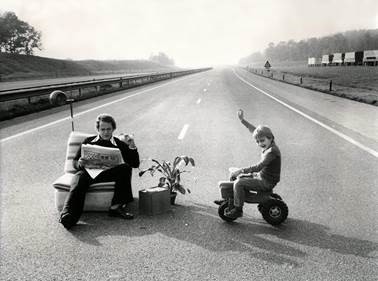 Imagine sitting on your favorite piece of living room furniture and enjoying some quiet time. Only you aren't in your living room... you're smack dab in the middle of a four-lane highway.

It seems unlikely that someone could enjoy peace and quiet on a La-Z-Boy in the middle of what is typically a busy street, but the picture you see above is a real photograph taken during a Car-Free Day " in the Netherlands during the 1973 oil crisis.

During that year, OAPEC (the Arab members of OPEC, along with Egypt, Syria, and Tunisia) said it would halt all oil exports to America, the Netherlands, Portugal, and South Africa, while also cutting overall oil production. This was in response to the involvement these countries had in helping Israel successfully push back incursions from Syria and Egypt during the Yom Kippur War.

What followed was a massive gas shortage and panic that shook global politics and the global economy. The price of crude oil quadrupled, from $3 per barrel at the start of the embargo, to almost $12 when it ended in March 1974. It doesn't seem like much by today's standards, but in the 1970's, this was crippling.

Gas stations began serving by appointment, only to regular customers. Less fortunate stations had to close altogether. Entire towns across America were shutting off electricity in an attempt to cut energy use during this troubling time. According to a Business Insider article, some areas even banned Christmas lights to manage their energy consumption. A popular phrase used in advertisements at the time was Don't be fuelish, " and these ads typically reminded people to be responsible with their energy usage.

Although prices eventually stabilized, the oil crisis exacerbated the economic difficulties that the U.S. was facing at the time. Some of which was brought on by the implementation of President Richard Nixon's fiscal policy, just after he took the nation off the gold standard in 1971. The government took action through the Emergency Highway Energy Conservation Act of 1974; a piece of legislation that established a national maximum speed limit of 55 mph. In 1976, Congress enacted the Weatherization Assistance Program, which helped low-income homeowners and renters reduce their demand for heating and cooling by providing more efficient insulation.

During the 1973 oil crisis, OPEC accounted for an average of two-thirds of American oil imports. Today, they make up 40%. The one thing that hasn't changed in the last 40 years though, is America's determination to wean themselves from Middle-Eastern oil.

Take a look below at some of the imagery from during the crisis; captured by freelance photographer David Falconer as he traveled through Oregon and Washington documenting the hard hit that befell America in the 1970's. Thankfully, times are better now and gasoline is in plentiful supply; however, if you ever find yourself getting low on your automotive lubricants, head on over to Petroleum Service Company (and don't worry--no appointments needed for our oil products).