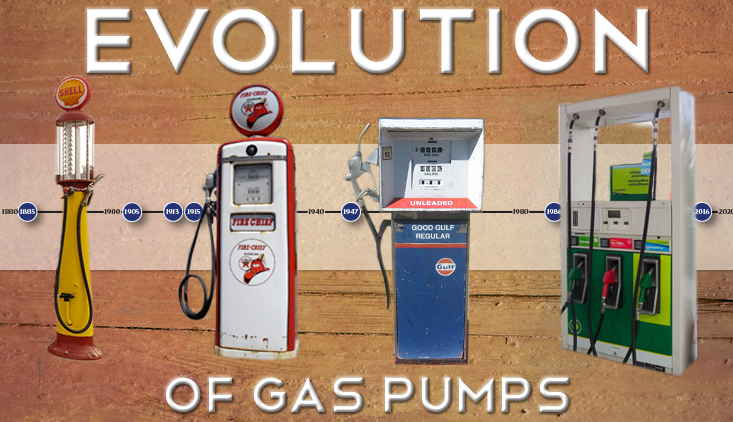 It all began with a man named Sylvanus Bowser, who patented his kerosene pump in 1885.

Bowser invented a method to draw water from a well using a wood plunger. He applied his invention to another device and created the kerosene pump in 1885. He then founded S.F. Bowser Pump Company, giving gasoline a purpose.

Prior to his invention, gasoline wasn't used often. It was used to burn stoves and lamps/light fixtures, but that was it. Store clerks would ladle the fluid from barrels into whatever container a customer brought in. Bowser's pump streamlined the process and made it much safer.

Years later, his invention led early motorists to divert from using the "drum and measure" method to fill their fuel tanks. Motorists poured fuel into measuring cans, then through a funnel lined with cloth that would strain out anything that could damage the engine.

Bowser sold his updated model to automobile-repair garages in 1892. In 1905, Bower made the first outdoor gas pump, or filling station, and improved the safety of the fueling process.

"He enclosed a square, metal tank in a wooden cabinet equipped with a forced-suction pump. A hand-stroke lever pumped the gas. This pump featured air vents for safety, stops that you could set to deliver a predetermined quantity and -- wonder of wonders -- a hose to dispense the gasoline directly into the vehicle's fuel tank. He called it the Bowser Self-Measuring Gasoline Storage Pump. " Wired.com

When Bowser's fueling stations became popular, clerks used some dangerous methods to gauge the amount of gas in a tank. They would listen for the sound of gas filling the tank by pressing an ear to the automobile or looked into the gas tank to see how much gas it held. To improve safety further, the clockface was created.

The demand for more precise fuel measurements rose in the early 1910s, leading to the development of the visual gas pump in 1915. Tall gas pumps with visible, beaker-like markings allowed clerks to visibly measure how much gas they pumped into a vehicle.

Then, gas had to be stored underground as traffic increased, and more updates were made to pumps, including art deco design to attract customers. 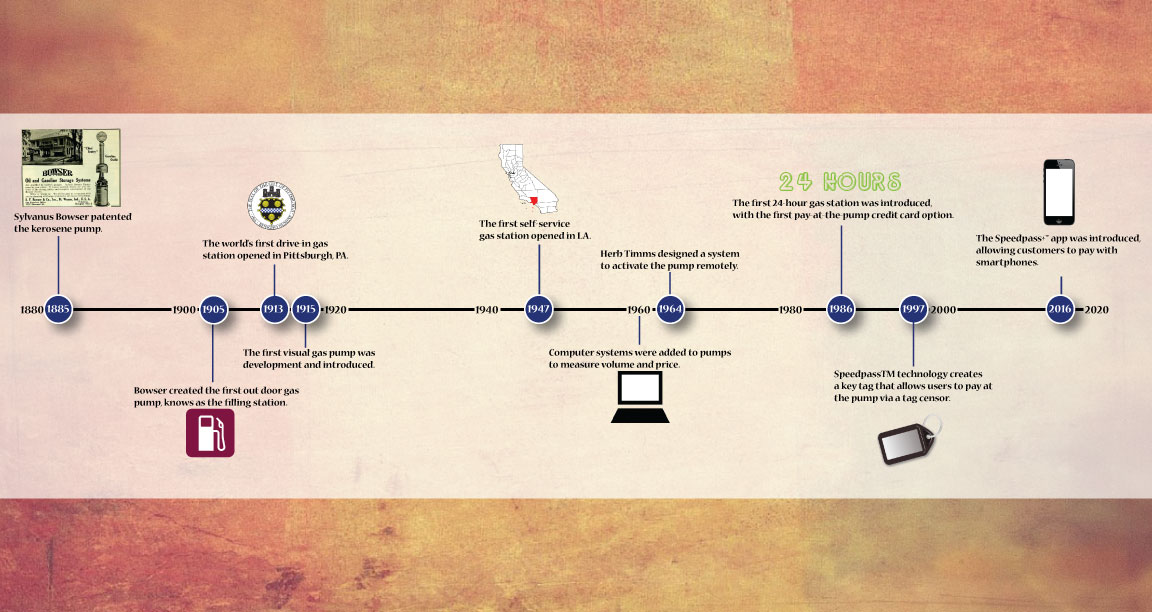 In the 1920s, bright colors were introduced to gas pumps and the size of the pumps decreased by the 1930s. This was also when electric pumps were introduced and a turbine was added inside the pump. Cylinders were eliminated and measurement reached precision.

Decorative globes remained on gas pumps through the 1950s, and between then and the 1960s, computer systems were added to measure volume and price. They became the gas pumps we use still today.

Now, not much has changed in the overall design and use of the gas pump. Prices have sky rocketed in recent years, and now customers can pay from their cellphones with ExxonMobil's Speedpass+ app, accommodating the technology-driven world we live in.