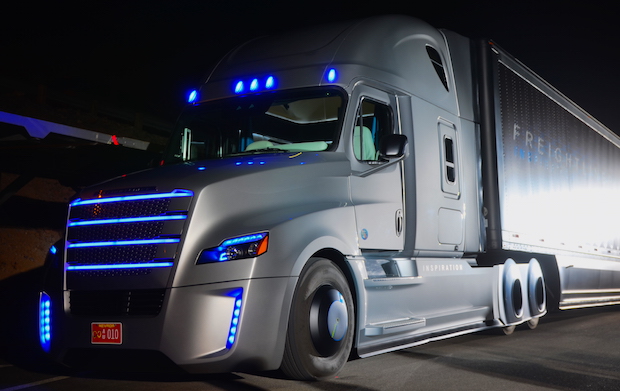 Truck manufacturer Freightliner has recently unveiled the first-ever prototype of a semi-truck that has the capabilities to drive itself autonomously, named the Inspiration.

According to a VICE Motherboard article, Freightliner is already licensed to operate Inspiration trucks on public Nevada highways and two of them are already driving themselves as you read this. An IEEE Spectrum article says that this license was acquired after a rigorous 16,000 hours of testing. The Inspiration trucks are capable of following GPS directions, obeying traffic rules, and stopping/slowing down/speeding up based on traffic patterns and conditions.

DOT categorizes these trucks as having autonomy level 3:

Limited Self-Driving Automation (Level 3): Vehicles at this level of automation enable the driver to cede full control of all safety-critical functions under certain traffic or environmental conditions and in those conditions to rely heavily on the vehicle to watch for changes in those conditions that would require transition back to driver control. The driver is expected to be available for occasional control, but with sufficiently comfortable transition time. "

What this means is that there has to be a driver who is ready and available, but is also free to do other tasks besides driving. Requiring a driver to be present has more to do with lawsuit/liability purposes than technological constraints.

HG.org says that driver fatigue makes up for approximately 30% of all truck-related accidents, with distracted driving not far behind. These accidents injure about 130,000 people annually, with some 5,000 of the injuries proving fatal. 98% of all accidents involving heavy trucks, such as a semi, involve at least one death.

Freightliner claims that drivers behind the wheel of autonomous trucks were 25% less drowsy than if they were driving a conventional truck. Although the long-haul trucking industry will probably never be completely safe, Freightliner knows the importance of innovation.

Are you feeling inspired yet?