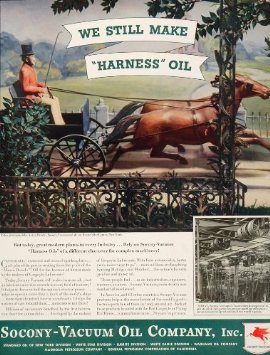 Many of today’s oil companies got their start selling harness oil. Early oilmen really did not know everything crude could do and they went through a process of application discovery as they attempted to produce different lubricants and fuels in the low tech setting of the mid 19th century. Harness oil was a result of a failed experiment to produce Kerosene by Hiram Bond Everest one of the founders of Vaccum Oil Company, the predecessor to Exxon-Mobil.

The residue left over from the experiment became a lubricant that Hiram determined could be used to treat harnesses. In the days before the internal combustion engine, a lubricant that could keep leather soft and flexible for riding was in high demand as driving horse harnesses had to frequently be taken apart, treated, and put back together for proper maintenance. By accident harness oil was born and originally sold in simple oyster cans. As described by an article in the AAAS, “America’s petroleum industry was started by men with no formal training in chemical engineering or geology. They substituted serendipity, persistence and entrepreneurial spirit for scientific knowledge.”

To read more on the pioneers of America’s petroleum Industry, Click Here, for a great article  entitled “Crude Stories” from the American Association for the Advancement of Science.

As a first line of defense, knowing that an individual is running a fever is by far the best indic…
Culture

Petroleum Product of the Week: Wrapping Paper
by Jordan Ramirez on Dec 02 2020

Over 500 years ago, Gutenberg's printing press surfaced as one of the most groundbreaking inventions…
Petroleum Product of the Week
×
x
Watch Our Annual Christmas Video!
​