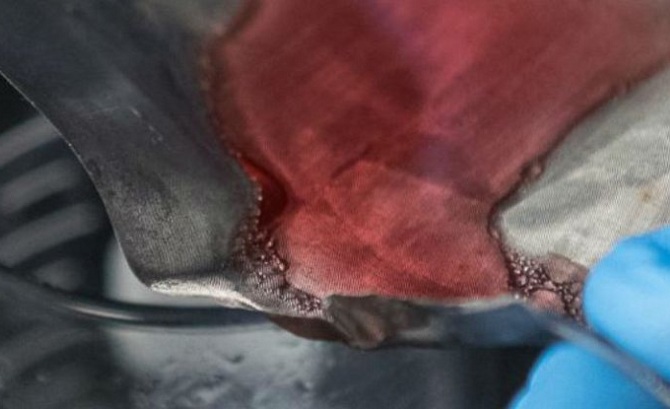 Ohio State University researchers have developed another tool in the every-expanding list of effective and environmentally-conscious methods to clean up water-based oil spills.

What scientists have on their hands is a stainless steel mesh that allows water to pass through, but not oil. The secret is an almost invisible oil-repellent that is coated onto the surface of the steel. According to a Phys.org article, in testing this new method, water filters through the mesh into a small beaker below. Oil collects on top of the mesh and is easily rolled off into a separate beaker by funneling the mesh to pour it.

"If you scale this up, you could potentially catch an oil spill with a net," said Bharat Bhushan, Ohio Eminent Scholar and Ohio State professor of mechanical engineering.

Also according to the article, the work was inspired by lotus leaves whose bumpy surfaces naturally repel water but not oil. To achieve the opposite effect, the researchers designed a coating using molecules of surfactant the chemical that gives cleaning power to soap.

The components of this new method are all non-toxic and largely inexpensive. Philip Brown, postdoctoral researcher at Ohio State, said that a large mesh net could be created for less than a dollar per square foot.

Another Ohio State research assistant, Dave Maharaj, is experimenting with molybdenum disulfide nanotubes that are a thousand times smaller than a human hair. He measured the friction on the surface of the nanotubes and compressed them to test how they would behave under pressure.

What Maharaj found is that under high loads, the layers of the nanotubes peel apart and create a slippery surface that greatly reduces friction. He believes that the molybdenum compound's compatibility with oil, along with its ability to reduce friction, make it a good additive for liquid lubricants. Also, in micro- and nanoscale devices, commercial oils may be too sticky for efficient operation and Maharaj thinks that the microtubes alone will help with that substantially.

"Nature reaches a limit of what it can do," said Brown to Phys.org. "To repel synthetic materials like oils, we need to bring in another level of chemistry that nature doesn't have access to.