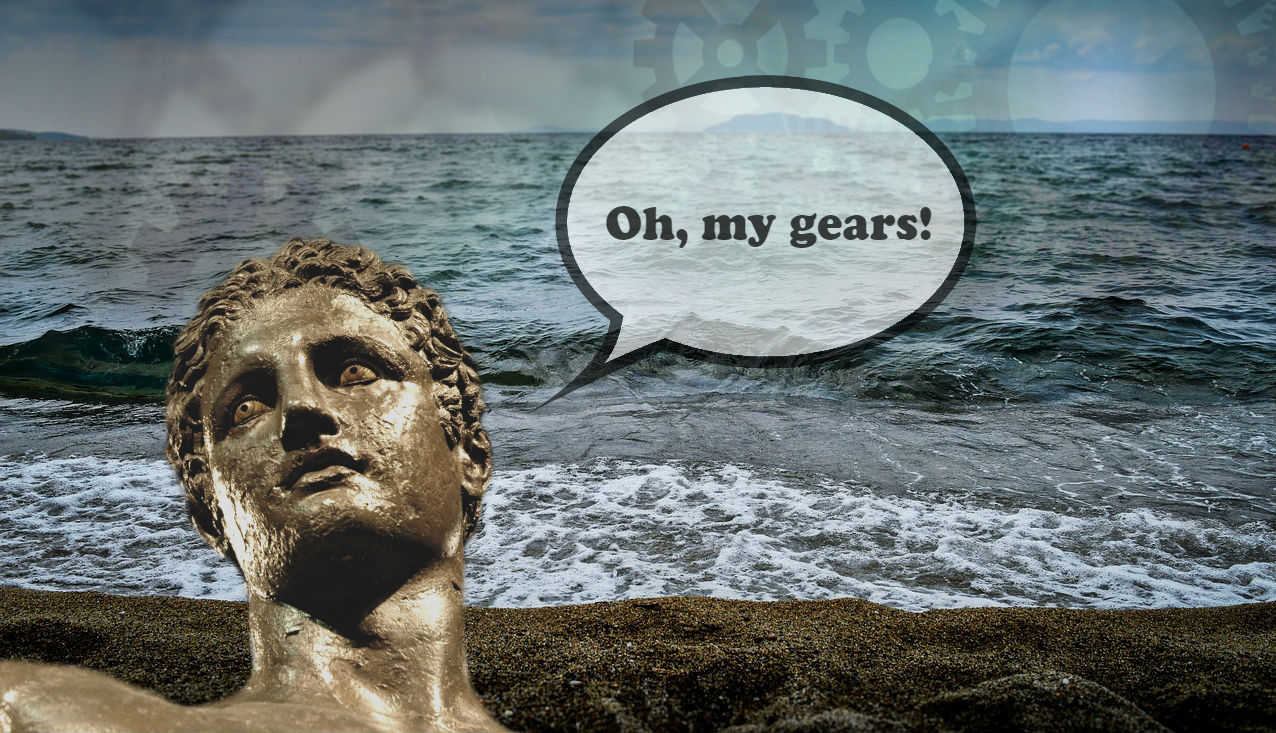 If a ship sinks more than 2,000 years ago and no one's around to witness it, does it make a splash in history?

The answer is yes it just might take a while.

In 1900, a storm blew a team of Greek sponge divers off course. Instead of heading to the coast of North Africa, the crew found themselves off the coast of an island called Antikythera in the Aegean Sea. Captain Dimitrios Kontos decided to seize this opportunity and dive in this location instead.

This decision would become historically significant.

When one of Kontos's team members, Elias Stadiatis, donned his diving gear (an early diving helmet and canvas suit with an air hose) and dove down into the sea in search of sponges, it didn't take long for an important discovery to occur. Stadiatis initially thought he had come across mounds of rotting corpses on the seafloor. In reality, Captain Kontos found something different: bronze. Deep below the water's surface lay a vast ship wreck and among the wreckage were ancient sculptures.

Kontos and crew made note of the location and continued on their way to the sponge diving location. When they returned, Kontos informed the authorities and handed over a life-sized bronze arm he brought up from the wreckage. Hoping to restore national pride post-Greco-Turkish war, the Greek Government hired Kontos and his team to salvage the wreck.

Seven decades after this initial shipwreck discovery, French Explorer Jacques Cousteau found coins dating the shipwreck circa 85 BCE. Researchers believe the ship could have possibly originated from the island of Rhodes.

Among the many beautiful sculptures of marble and bronze and other antique treasures found in the wreckage of this large treasure ship was a much humbler artifact. Item 1508, as it was initially known, was a bronze mass the size of a shoebox. It was unglamorous and, frankly, an enigma. Scientists didn't know what to make of it, and so for decades no one really tried to make heads or tails of it.

Cased inside its wooden box were bronze parts with tiny inscriptions. These little metal parts were actually precision gears and this revelation wasn't a major one. Here's the thing: the earliest known precision gears didn't appear before the 14 th century. And while at this time researchers weren't sure how old Item 1508 actually was, the shipwreck occurred 1,400 years before the known use of meshing gears. Mind blown? Mind blown.

Scientists had difficulty determining the device's purpose due to the sheer level of corrosion. Some believed it was an astrolabe, an ancient device used to tell time. Others believed that it was more complicated than that. In either case, the enigma of item 1508 meant the mechanism fell into another kind of obscurity this time above the sea.

But by the time the 1950s rolled around, interest was once again piqued. Scientists began attempting to replicate what is now known as the Antikythera Mechanism, so named after the island whose coast was host to the shipwreck.

What? And Where? And When?

A researcher by the name Derek de Solla obsessively researched the mechanism and became convinced it was an archaic computer designed to predict astronomical events. Together with Greek radiographer Dr. C. Karakalos, he took the first x-rays of the device. In 1974, he published his findings, Gears from the Greeks. " De Solla believed that each ear represented the movement of a different heavenly body and could thereby recount the astronomical cycles of known planets.

Despite his important discovery (ie. Discovering evidence of gears over 1,000 years before the earliest known evidence), his findings didn't do too well at the time. Other academics either weren't quite ready to discount established historic timelines or else were more focused on ancient texts than gears.

It certainly didn't help that in the late 1960s, Swiss writer Erich von Däniken published an unscientific book on the subject called Chariots of the Gods. In this text, von Däniken theorized that aliens brought the Antikythera Mechanism to Earth as one of their gifts.

Thankfully, the Antikythera Mechanism has all but shed its alien skin now.

Here's what we know about the Antikythera Mechanism.

While Jacques Cousteau dated the shipwreck circa 85 BCE, the device probably existed for at least two decades prior to the sinking. Researchers date the Antikythera Mechanism somewhere between 150 BCE and 50 BCE. And while they can't be certain, they believe it could have originated from Rhodes because the island has a history of making automata and mechanical artistry.

During the initial re-interest in the 1950s, replication was hard because there were gaps in understanding its design. Severe corrosion and missing pieces made it extremely difficult discerning its complete function. In 1971, two scientists began using x-rays and gamma rays to analyze the fused and fragmented mechanism. These studies brought to life the mechanism's complexity and proved that it was so much more than an astrolabe. For such a small device, it contained a great many pieces and gears.

Flash Forward to the 21st century.

In 2005, scholars took some computed tomography (CT) scans of the device, which at the time was cutting edge. These detailed images greatly helped researchers understand the construction of the mechanism.

Dozens of individual dials on moved in a fairly complex mechanism. A knob or handle on the side of the device wound it forward or backward. As the user turned the knob, trains of interlocking gear wheels drove a number of hands (at least seven) at varying speeds. The hands described the movement of the heavens and each corresponded to the celestial bodies known back then (could be seen by the naked eye). These hands represented the Sun, the Moon, Mercury, Venus, Mars, Jupiter, and Saturn.

On the back of the case were more dial systems. One showed solar and lunar eclipses. The other was a calendar that showed timing for important events like the Olympics. While much of the device's uses are still unknown because of missing pieces, we do know that it demonstrated the Greek Zodiac, moon phases, planetary movement, Egyptian calendar, and a 365-day calendar that predicted the astrology for a chosen date.

The shipwreck off the coast of Antikythera has the distinction of being the first shipwreck to ever be studied by archaeologists. The Antikythera Mechanism was one of many luxury goods and technological pieces unearthed from the wreckage.

Because of the mechanism's complexity and scientific computing, it is often referred to as the first known analog computer. It is also the earliest bronze geared device ever to be found. And these gears weren't crude by any means. They were precisely cut and controlled complex mechanisms. The internal clockwork mechanism utilized at least 30 meshing gears which had between 15 and 223 triangular teeth.

Gears play a major role in making sure the world runs smoothly. And while we often associate gears with the more complex machinery of the industrial revolution, the Antikythera Mechanism proves that humans have been able to create and compute with precision for a very long time. (We also fully intend to use gears far into the future, as evidenced by the Clock of the Long Now.) Further, the complexity of the Antikythera Mechanism seems to indicate that this wasn't the first use of such technology design. If this is the case, no one really knows how long mankind has been using precision gears.

Or, you know, the aliens.

If you love ships (and shipwrecks?), check out our post on ships and sea monsters.