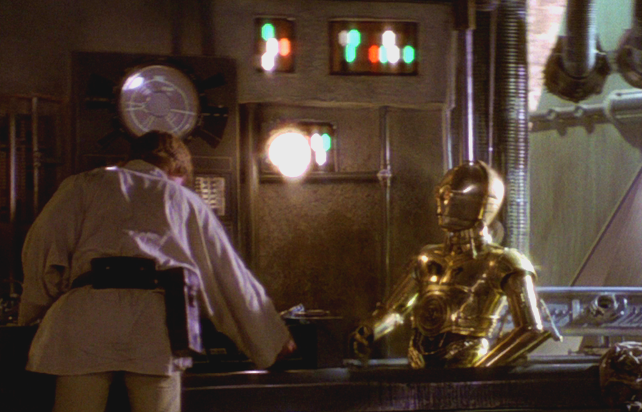 Tonight, enemies from either side of the Force will yet again join hands to witness the continuation of a global phenomenon that nobody (upon further examination) can really explain.

With less than a few hours from the theater release of the long-awaited follow-up to the widely-loathed Episodes I-III, even some super fans of the saga can't help but wonder why the force is so strong with this one. Riding on a whim of hope, old fans seek to be redeemed by one man, J.J. Abrams, while young fans simply and unknowingly place trust in either a collective unconscious or their parents' confident (albeit questionable) cinematic recommendations.

But this is 2015. The canon is well-established, the Joseph Smith of Star Wars (George Lucas) has moved on with billions in tow, and Han Solo is a household name (and also a Lego with condescending eyebrows).

The somewhat puzzling fact remains: everybody loves Star Wars (except Brian De Palma -- he infamously said that Episode IV: A New Hope was the worst film he'd ever seen).

But why? What made the original Star Wars so massively appealing that it forever changed the way people view cinema? While there's likely no definitive answer, we can rest assured that the scene described below likely had little to do with it:

In this scene, Luke Skywalker gives C-3PO an oil bath. Do you remember this?

C-3PO remarks: " Thank the maker! This oil bath is going to feel so good!"

As Harrison Ford, Carrie Fischer, and Mark Hamill will readily admit, George Lucas' strengths were never so much in the realm of scripting. Nonetheless, though this seems relatively like a "throwaway" scene, it appears that just like everything in the Star Wars saga, it has its own "Wookiepedia" (does this really require further explanation?) page, entitled: "oil bath." Check it out here.

Yes, this is clear evidence of the degree to which these films have affected our society -- someone took it upon themselves to spend their free time documenting every instance of oil baths in the Star Wars canon, even going to the extent of explaining the purpose of this raging phenomenon on Tatooine:

An oil bath was a means of removing accumulated grime, such as dust, from a droid.

Yes, of course. Necessary information? Eh...in either case, it exists. And beginning tomorrow evening, hundreds more Wookiepedia and Wikipedia pages will begin to surface: the authors picking apart every last piece of scenery and script and chewing it until the film's meaning is about as concrete as Jabba the Hut. For what purpose, we'll never be certain -- but such is the beauty of the Star Wars saga: a perplexing and indescribable beauty.

However, let it be said that you've been given fair warning: there have been rumors circulating of a prophecy involving The Force Awakens; it is said that a rogue George Lucas' may indeed, thirty years from now, try to digitally impose Hayden Christensen upon to every last cut of this film in his final effort to fix his vision -- therefore, enjoy it while you can.

In the meantime, shop premium petroleum products from www.petroleumservicecompany.com -- oil products so fine, you can bathe your droids in them!