It's pretty common knowledge that there are a variety of petroleum products that go in your car (as well as various components such as rubber tires), but how often do you think about the petroleum within the roads that you drive your car on? (Note: Pennsylvanians generally have very strong opinions regarding their state's roads, so they tend to think about this a lot; if they're not talking about the weather they're talking about the roads ...and this is no exaggeration.)

Modern roads, parking lots, and airports are paved with a composite material called asphalt concrete (commonly referred to simply as asphalt, blacktop, and pavement in the US). This asphalt concrete consists of mineral aggregate particles and an asphalt binder.

Asphalt (also known as bitumen outside of the US) is a semi-solid form of petroleum and is sticky, black, and highly viscous. It can either be found in natural deposits, or it can also be a refined product. Naturally occurring asphalt/bitumen is sometimes called crude bitumen and has a viscosity similar to cold molasses (so really, really, really thick). Naturally occurring asphalt is formed from the remains of ancient, microscopic algae and other dead organisms (if you'll remember, crude oil and natural gas are fossil fuels also formed by the decomposition of organic organisms). These remains were deposited in the mud at the bottoms of lakes and oceans and transformed under the heat and pressure of deep burial.

So yes, there's a lot of pressure to become asphalt ...lots of stress and heated arguments with parents who don't understand that no it isn't just a phase.

While large amounts of asphalt/bitumen come from nature, a large majority used for commercial application is obtained from petroleum. Of this produced asphalt/bitumen, about 70% is used in road construction (you know, those Pennsylvania roads that are always under construction and always full of pot holes). Besides roads, it's is also used to pave parking lots, outside basketball courts, as well as bituminous waterproofing products like roofing felt and sealing flat roofs. 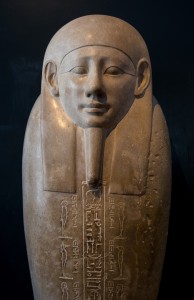 Since asphalt/bitumen has been around for so long (thank you, ancient microscopic organism remains), it's not really that hard to believe that uses for this naturally-occurring material have been found long ago, too (at least near-ancient).

In the US, roads have been paved with materials that include asphalt/bitumen since at least 1970 (when a street in Newark, NJ was paved). And in 1876, asphalt-based paving was used to pave Pennsylvania Ave. in Washington, DC. While road paving didn't become a thing " until the 19 th century, other used for asphalt go way back.

For the earliest uses, you'll need to go back to at least the fifth millennium BC to the early Indus valley civilizations, where asphalt/bitumen was used as an adhesive and a lining to waterproof crop baskets. In the ancient Middle East, Sumerians also used it for waterproofing, as well as for mortar, ship caulking, and cement. Ancient Egyptians even used it to embalm mummies.

Beyond ancient civilizations' uses for asphalt, other uses for the material exist beyond its more modern (and common) applications in roadwork:

Besides road construction, roofing shingles account for a majority of the remaining asphalt consumption; other modern uses include cattle sprays, fence-post treatments, and waterproofing for fabrics.

Yes, it's true that asphalt cement roads don't last forever (just ask any Pennsylvanian driver), but unlike other materials (such as concrete), torn up asphalt can be reprocessed and reused to make new roads--in fact, 99% of asphalt removed from road surfaces is reused for new pavements, roadbeds, shoulders and embankments.