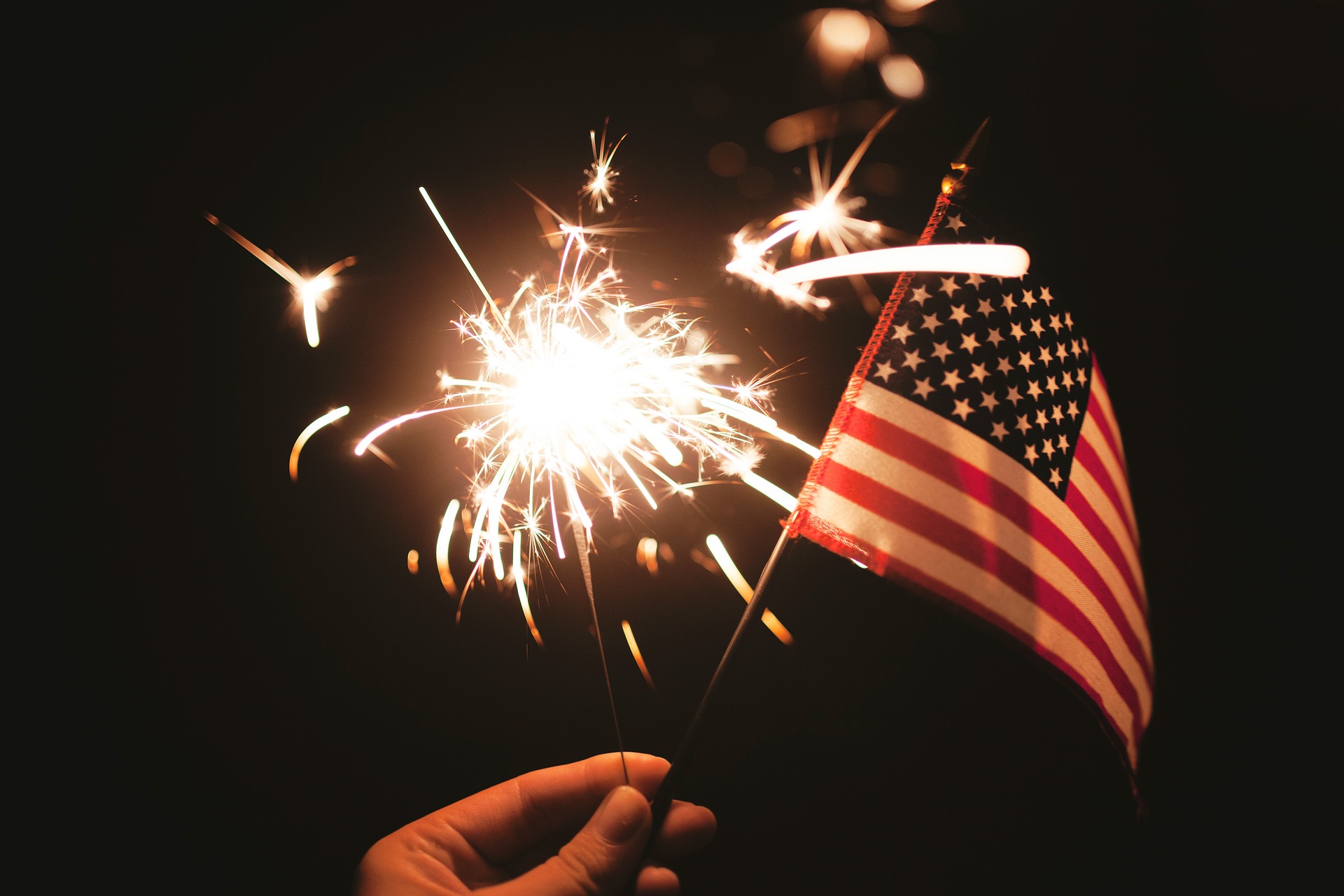 From the very beginning, Americans have been encouraged to celebrate the birth of American independence. "

On July 2, 1776, John Adams even wrote to his wife Abigail that it should be cause for mass celebrations: The day will be most memorable in the history of America, " and that it will be celebrated by succeeding generations as the great anniversary festival . . . solemnized with pomp and parade. . . games, sports, guns, bells, bonfire, and illuminations [fireworks] from one of the continent to the other. " 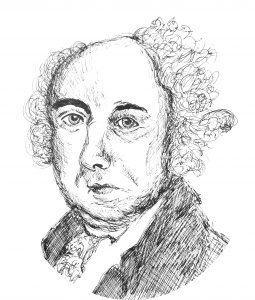 Way to go, John! I think most Americas (both past and present) stand behind your dedication to making the anniversary of Independence Day a huge, country-wide party. But here's the kicker: John Adams did not agree that Independence Day should fall on July 4th.

John Adams believed that July 2nd was the correct date on which to celebrate the birth of American independence, and would reportedly turn down invitations to appear at July 4th events in protest. Adams and Thomas Jefferson both died on July 4, 1826--the 50th anniversary of the adoption of the Declaration of Independence. (History.com)

Although Adams' behavior seems rather childish (if reports are actually true), Adams isn't too far out in left field.

While we all know that the Declaration of Independence was signed on July 4, 1776, it was 2 days prior when the Continental Congress actually voted in favor of the colonies' independence. So really it's the difference between yeah let's do this thing and yeah let's sign this thing and make it official. Everyone else agreed with the latter date being official. Oh, John.

And even though we might not celebrate the Fourth of July on the Second of July, at least we agreed on some things, like everyone's favorite celebratory explosive: fireworks! 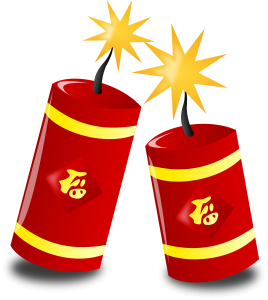 While Americans sure love fireworks, we didn't invent them; fireworks have been around for a really long time.

Though there's some speculation, many historians believe that fireworks started in China as early as 200 BC. These fireworks " were in the form of bamboo that, when roasted in a fire, would explode with a BANG. Sometime between 600 and 900 AD, Chinese Alchemists mixed together potassium nitrate, charcoal, and sulfur and created what we know as gunpowder. They stuffed this concoction into bamboo shoots and threw them in fire, creating a load blast. Behold! The first firework is born.

Eventually paper tubes replaced the bamboo shoots and by the 10th century, the gunpowder concoction was used to make crude bombs and weapons. Around the 13th century, gunpowder was making its way to the Middle East and Europe, and metallurgists and military leaders began making powerful weapons.

But it wasn't just used as a weapon. Europeans created their own fireworks " to commemorate military victories and to enhance public ceremonies and celebrations. Firework experts called firemasters put on firework displays. By the Renaissance, schools dedicated to pyrotechnics were cropping up throughout Europe. Italy became the most famous for elaborate and colorful displays (it was also the Italians who in the 1830s were the first to use metals and other additives to create bright, multihued sparks and sunbursts seen in firework demonstrations today).

By the 17 th century, fireworks crossed the Atlantic and made their way to the New World. Legend has it that Captain John Smith (yes, that John Smith) set off the first display of fireworks in Jamestown in 1608. It's probably safe to say that these pyrotechnics really took off (maybe a little too well): in 1731, Rhode Island banned the mischievous use of pyrotechnics. "

Following July 4, 1776, Fireworks were used to celebrate the anniversary of America's independence, and they have been used every year ever since, as well as to celebrate a variety of events, such as football games, concerts, etc. And, as we tend to get a bit overzealous, the Society for the Suppression of Unnecessary Noise was established in 1890 to, as you can imagine, suppress unnecessary noise.

There are a number of ingredients vital to a firework recipe's success details which are kept secret for obvious reasons. Plus, it all depends on what kind of firework we're talking about aerial displays, firecrackers, sparklers, etc. But a basic firework (what generally first comes to mind, anyway) is composed of a few basic elements: a casing (or shell), fuel, oxygen producer, binding resin, color-producing agents, and a fuse. 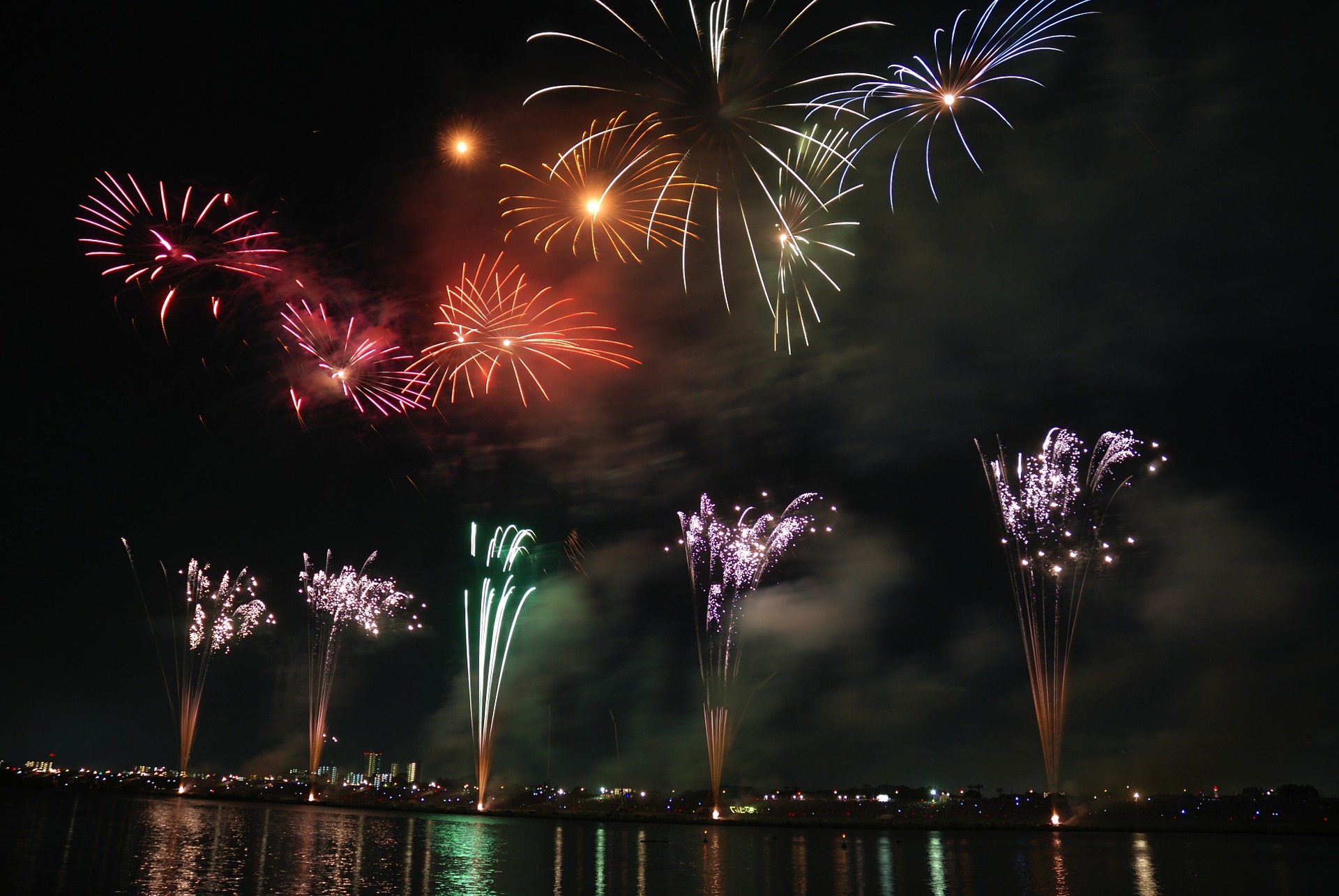 Everything that goes inside the shell (including the arrangement of such elements) determine what the firework will look like when the fuse is lit if it works. These exact details are planned ahead of time when constructing the fireworks, and are hush hush.

Just like ancient times, modern fireworks contain gunpowder, also called back powder. The black powder used in fireworks is roughly 70% potassium nitrate, 15% charcoal, and 10% sulfur. When the fuse is lit, the mixture reacts and propels the shell into the air from the mortar-launching tubes on the ground. It requires very little energy to combust, which is why a small flame can launch huge firework displays.

A variety of other ingredients and special assemblies are utilized to create special effects, such as color. Multicolored fireworks are achieved using different chemical compounds. Calcium, for example, produces bright orange, while mixtures of strontium carbonate and copper oxide produce violet. A variety of greens are produced from various barium compounds, while reds come from strontium and lithium carbonates.

So you might be wondering where's the petroleum in all of this? Did we trick you? No!

While it might not seem like petroleum plays a part in the manufacturing of fireworks (although consider the greases and lubricants required to operate the manufacturing machinery that's involved somewhere during production), this is an example of how sneaky petroleum can be, and how its presence in our everyday lives can go by easily unnoticed (and no, we don't mean sneaky in a pejorative way).

Remember the gunpowder used to make fireworks? One of the key ingredient is sulfur. While sulfur occurs naturally as the element, and was abundant in ancient times, today almost all elemental sulfur is produced as a byproduct of removing sulfur-containing contaminants from natural gas, petroleum, and other related fossil resources. As well as sulfur, some modern firework recipes can contain polyvinyl chloride, which you may recognize as a petroleum-derived synthetic polymer.

So while the firemasters of England probably weren't shooting off petroleum-containing rockets, there is a very high probability that the ones you see this holiday weekend are. Not to mention, of course, the ever popular plastic poppers (since plastics are derived from petroleum!).

All of us at Petroleum Service Company hope you have a happy and safe holiday weekend!

And feel free to start celebrating early (say, perhaps July 2nd?)... it's what John Adams would want you to do.