Picture yourself in a boat on the sea. It's ancient times. You don't know the exact date, or even what year it is, because who has time to worry about such trivial matters when your naval ship and the water and the very air are on fire! You're on fire!

And you're not engulphed with just any fire. It's Greek fire, used by the Byzantines against anyone trying to lay seize to Constantinople. By most accounts, it's all but inextinguishable.

Let that sink in for a moment.

I'm sorry for your part in history.

Incendiary and flaming weapons have been used in warfare for a long time. In the times of classical antiquity and the medieval period, early thermal weapons included a number of sulfur-, petroleum-, and bitumen-based mixtures. The goals of such weaponry were to destroy or at least damage enemy personnel, fortifications, and territories. They were used by individuals, manipulated by war machines, and were utilized as military strategy.

The most common (and simplest) thermal projectiles used were boiling water and hot sand (enemies are a little less threatening with hot sand in their eyes). Arrows and pots containing combustible matter have been used as early as the 9 th century BCE by the Assyrians (Iron Age Mesopotamian Empire) as well as the Greco-Roman World, too. Think along the lines of flaming arrows and old school grenades--I used to be an adventurer like you until I took a flaming arrow to the knee.

But nothing in the ancient world was as feared or as mythicized or as secret as Greek Fire.

If you want a quick idea of Greek Fire, think of it as kind of like a pre-napalm-like napalm. And you best be relatively happy with that, for although all this time has passed, it still remains a mystery.

The secrets of this fearsome weapon were shrouded in mystery even during the peak of its use; the Byzantines, who used it in naval battles to great effect, didn't want it falling into the wrong hands. They didn't want their enemies to use their powerful weapon against themselves.

While western European Crusaders applied the term Greek fire " to all types of incendiary weapon (used by a range of cultures including Arabs, the Chinese, and the Mongols), these incendiary mixes were not the same as the figuratively trademarked Greek fire made by the Byzantines.

I mean, not that we actually know what all went into Greek fire proper its composition remains a matter of speculation and debate. Proposed constituents include various combinations of pine resin, naphtha (petroleum or pitch), quicklime, calcium phosphide, sulfur, or niter (potassium nitrate).

Message fragments and ancient texts from around the 7th century speak of Greek fire as a terrifying chemical compound that scared the Bulgarians, the Russians, the Arabs and Turks for 1,000 years. 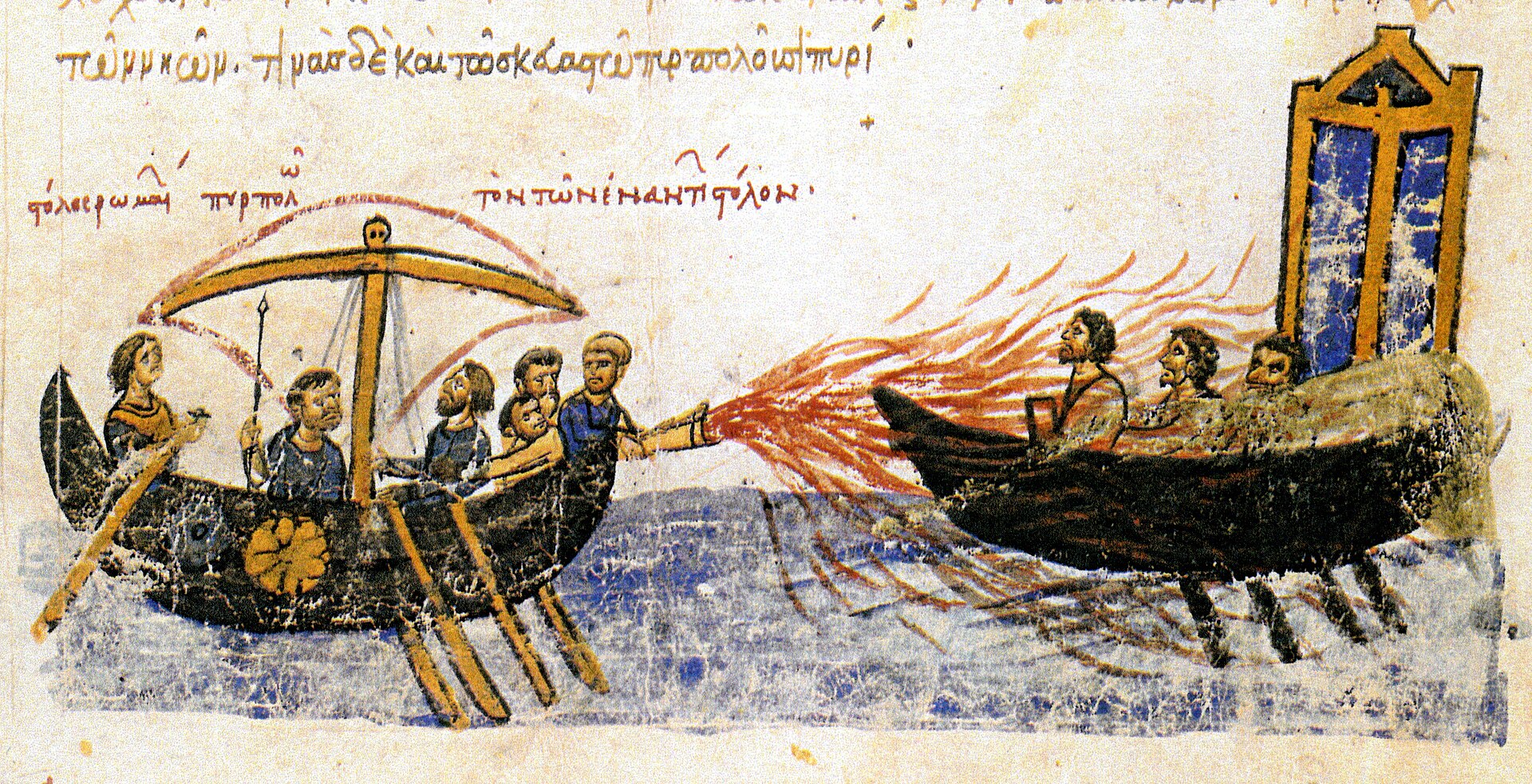 "For 1,000 years, the Byzantine Empire set fire to every warship that tried to take Constantinople".

The Greek fire was developed c. 672. Theophanes the Confessor, a monk and chronicler of the Byzantine aristocracy, ascribed it to Kallinikos, an architect. However, the accuracy is in question because there are reports of fire-carrying ships prior to Kallinikos's arrival to Constantinople. This discrepancy could be attributed, perhaps, to Kallinikos introducing an improved version of an established weapon. Some historians believe it's likely that Greek fire was created by chemists who had inherited the discoveries of the Alexandrian chemical school.

Either way, its invention came at a critical time to the Byzantine empire and aided in repelling the Muslims at the first and second Arab sieges of the city. It was also prominently utilized during Byzantine civil wars.

Though the exact composition of Greek Fire is unavailable, most scholars today believe that petroleum was likely the main ingredient. The Byzantines had easy access to crude oil via naturally occurring wells around the Black Sea. Another strong piece of evidence supporting the petroleum theory is the other name for Greek fire: Median fire. Sixth-century historian Procopius has written records that petroleum ("naphtha" to the Persians) was called "Median oil" by the greeks. This suggests that naphtha was at least a basic ingredient of Greek Fire.

Early uses of Greek Fire as an incendiary weapon include the application of grenades, which were used similarly to how they are used today: explosive device thrown into a mass of enemies. Clay grenades filled with greek fire, once lit and thrown, meant some pretty bad news if you were on the opposite side. Assuming that they did contain naphtha, naphtha is incredibly sticky and would have adhered to everything it came into contact with.

But as bad as, say, 1,000 grenades would have been on the battlefield, there was something that was much more terrifying: the ultimate death machine.

Picture yourself once more on that boat in the sea. Your mission is to lay siege to Constantinople, but before you can ever consider getting close to the city, a ship from the Byzantine navy approaches your vessel. It's a terrifying sight--affixed to the prow is the brass head of a roaring lion. Before you even get the opportunity to flinch at the sight of the menacing beast, flames erupt from its jaws and cover the entirety of the boat. Those that aren't covered in flaming vomit abandon ship despite their heavy armor which will surely drag them down beneath the waves.

Numerous contemporary sources attest that the Byzantines used tubes to project Greek fire at their enemies, particularly aboard ships. This technology, over 1,000 years old, is reminiscent of a flamethrower. Some sources provide some insight into the composition of such a mechanism, such as the Wolfenbüttel manuscript:

"...having built a furnace right at the front of the ship, they set on it a copper vessel full of these things, having put fire underneath. And one of them, having made a bronze tube similar to that which the rustics call a squitiatoria, "squirt", with which boys play, they spray [it] at the enemy."

Besides the larger tubular projectors, 10th-century military documents also indicate the use of portable hand-held projectors. Leo VI the Wise, a Byzantine emperor from 886-912, claims to have invented them.

I don't know about Adele ...but the Byzantine Empire could totally set fire to the rain.