Is there a difference between soap and detergent?

The short answer is yes while both are made to clean, they come from different sources and are used differently.

While there are all kinds of soaps, they are all the metal salt of a fatty acid. Soap has been around since ancient times, and archaeological evidence suggests that use of soap goes back as far as 2800 B.C. And by the 2 nd century AD, the Romans were regular soap makers. The first soaps were commonly made by boiling together fats and ashes. By the 15th century, olive oil-based soaps were produced in Castile, Spain, and sold around the known world. Americans made their own soaps at home during the colonial period and the 18th century, and it wasn't until the 1930s when soap manufacturing shifted from the home to an industry.

Detergent, on the other hand, hasn't been around for nearly as long.

The first detergents (or artificial soap) were produced in Germany during WWI, when the war caused a shortage of animal and vegetable fats and oils. Besides the shortage of fats and oils, people needed a substance that was resistant to hard water and cleaned more effectively. The result was built " detergents, which comprised of a surfactant (a surface-acting agent or soap) and a builder (a chemical that enhances surfactant performance and assists laundering efficiency). Petroleum proved to be a plentiful source for manufacturing such surfactants.

How do detergents work?

The most common household detergents are laundry detergent and dish detergent, but detergents are also found in fuel additives, bubble bath, and are used to make bubble solution (you know, the kind you blow around your backyard). 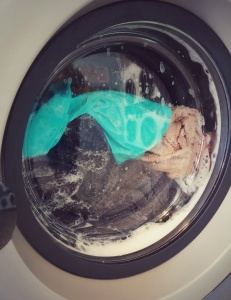 If you're working on your car and get a grease spot, you probably already know water alone isn't going to do anything to clean your now-soiled shirt. This is because oil and grease repel the water molecules, thereby eliminating your chances of washing it off. " This is where the surfactants come into play.

With the way detergent surfactants are made (whether they are anionic or nonionic), they produce a chain that includes a water-hating hydrocarbon and a water-loving chemical, which are on opposite ends of the chain. The water-hating end is repelled by the water by attracted to the oil in the grease spot; the water-loving end, on the other hand, is attracted to the water molecules. The opposing forces actually loosen the soil and suspend it in the water, while the warm or hot water actually dissolves the grease and oil. The agitation (mechanical energy) helps pull the soil free.

Isn't it funny that the very product that almost ruined your shirt was thwarted by a different product of the same (or similar) origins? That's the power of petrochemicals, man.