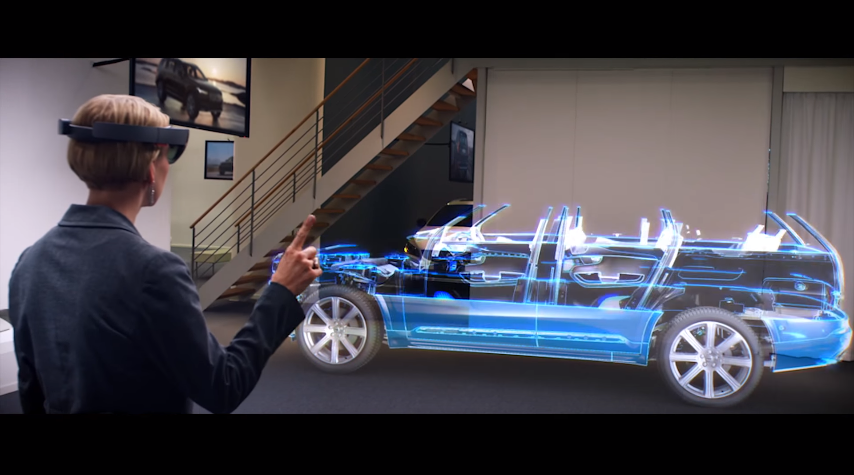 The ever-innovative, creative minds behind Volvo have cemented —the premium European car —manufacturer as the first major vehicle company to hop on board with Microsoft's new hardware, the HoloLens, a remarkable, new device that will soon be making the long-prophesied emergence of hologram technology a reality.

The automobile-industry has gradually been making strides toward integration with new technologies over the last few years. What started with collapsible LCD TVs in minivans has progressively materialized into such realities as the self-driven car (a likely product of both Tesla and Volvo in the coming years), a rumored collaboration of Apple Computers and BMW, and, now, the HoloLens:

What's in the details?

Volvo -- according to what is likely a Microsoft-funded YouTube video -- plans on implementing the technology at both the manufacturing and commerce level. This may mean full customization options being filtered right before your eyes, yet, it may also prove to increase the reliability and safety of these vehicles should this tech be executed effectively on the assembly line. Though Microsoft has been keeping the marketing effort fairly quiet over the past several months, it seems they have finally begun to pick up the pace with their advertising campaign for the HoloLens. This, we can hope, means great things for this technology which has been on the unfortunate end of some speculation and criticism thus far.

How does the HoloLens —work?

Well, heck if I know.

The people at Microsoft, however, seem to assert that this device changes the common conception of CPU, GPU, etc. Instead of one of the aforementioned varieties of processing units, the new —unit is referred to as the HPU: Holographic Processing Unit, which allows the device to detect where you might be looking, while responding to your gestures and voice, so that the holograms could respond appropriately.

Furthermore, the device manages to scan your pupillary distance in order to orientate your field of vision with the hardware's —spacial mapping " capability. Spacial mapping is what can make a digital ping pong ball, per say, bounce a few times off of your kitchen table, then proceed to roll off of the edge, landing on your carpet.

Digital holograms are now capable of interacting with physical objects. You can pin a resizable video player to your wall, play Minecraft on your kitchen table, and even hang out with digital puppies (if real pets just aren't doing it for you). The prototypes have been tested over and over again by hundreds of blogs, YouTube channels, etc. and the bottom line seems to be: Microsoft HoloLens is some pretty exceptional technology.

However, there seems to be one outstanding issue: field of view. Instead of fully integrating digital objects with physical space, the HoloLens ( at this current stage in development) is only capable of showing you a fraction of the digital space these objects occupy.

Though these digital objects have widely been touted as remarkably clear, sleek and opaque, the lack of field-of-view is likely the technology's biggest (and perhaps only) criticism. Otherwise, the developmental versions of this technology seem to be functioning exceptionally well.

At the very least, Microsoft HoloLens assures us that the line between science fiction and fact is becoming increasingly blurred.