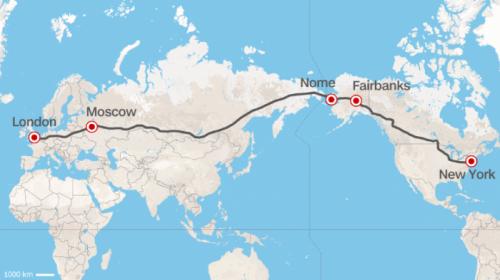 An incredibly ambitious plan to construct the world's longest highway, connecting New York City to London on a single road, was recently proposed by Russian Railways president Vladimir Yakunin at a Russian Academy of Science meeting.

The Trans-Eurasian Belt, as it is known, would stretch a vast 12,400 miles connecting New York to Europe via a bridge between Alaska and Russia. If approved, the project makes use of existing roadways across multiple countries and also includes a high-speed rail network to link Asia with Europe.

"This is an inter-state, inter-civilization project," said Yakunin in a Business Insider article. "This project should be turned into a world 'future zone,' and it must be based on leading, not catching, technologies."

Siberian Times reports that if development is successful, the Trans-Eurasian Belt could create up to 10 to 15 new industries, new cities, and a significant number of new jobs. The project's estimated cost is in the trillions but Yakunin argued that the project's economic benefit would outweigh the money spent.

Effectively, with the Trans-Eurasian Belt (and the help of the Eurostar and Panama Canal), you could drive from Scotland's northernmost point in the United Kingdom to the tip of South America. Currently, the longest road in the world is found in Australia, the Highway 1 and runs approximately 9,000 miles around the outer perimeter of the country/continent.