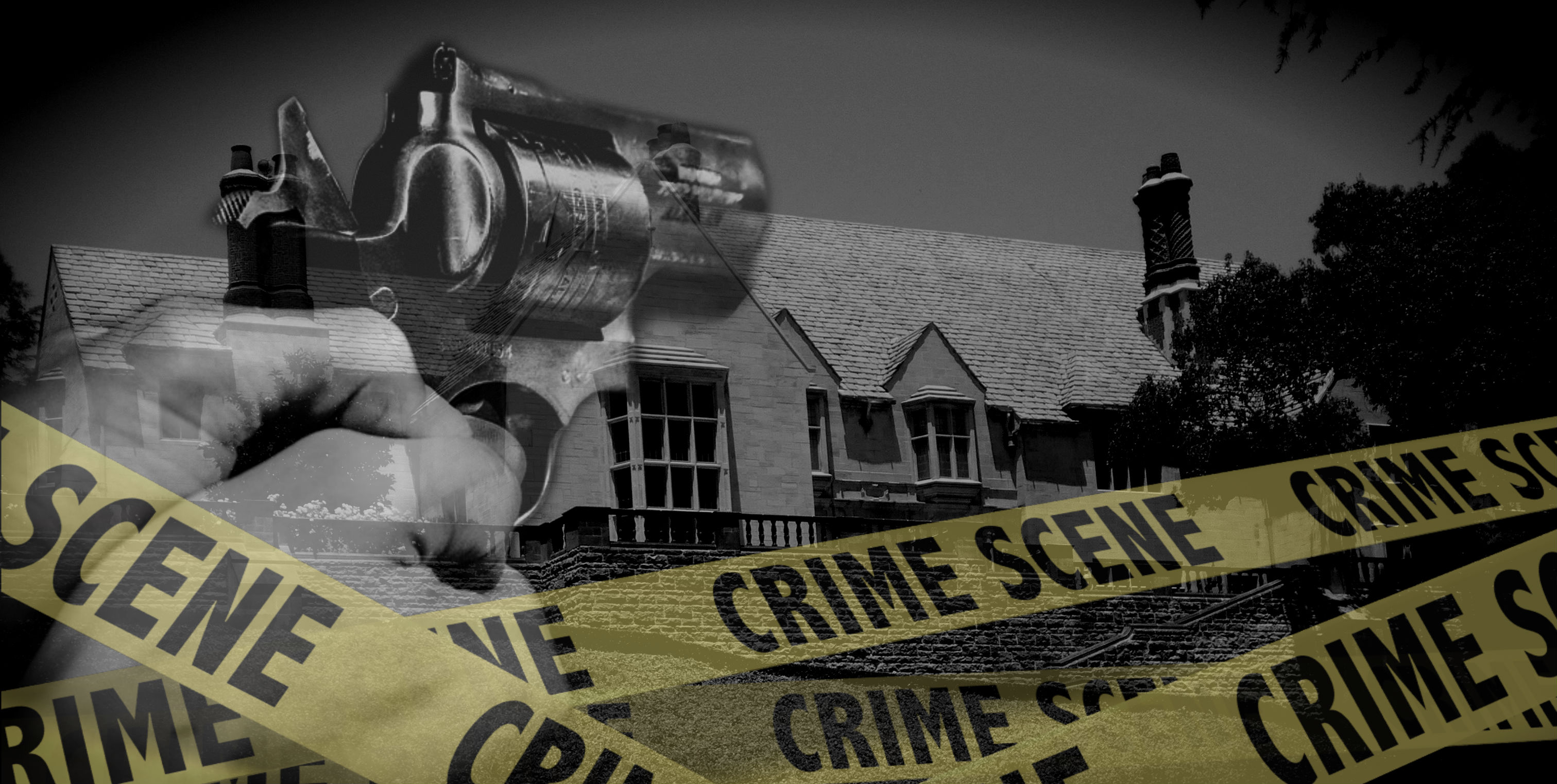 If you were to take a tour of the house, though, you might find it recognizable it's been used a lot in filmmaking and television production. Its descending staircase, for instance, remains one of the most famous sets in Hollywood and has appeared in everything from Gilmore Girls to The Big Lebowski to Mariah Carey music videos.

But perhaps unlike your run-of-the-mill Hollywood set, the original drama that unfolded within its gray stone walls is very, very real. And mysterious.

A House Built of Stone-- but Made from Oil

Edward Laurence Doheny was an oil tycoon who really found the American Dream when he drilled the first successful oil well in the Los Angeles City Oil Field in 1892.

E.L. Doheny and Charles Canfield were lucky when they discovered oil near the corner of Second and Glendale Blvd by 1900, each man was bringing in half a million dollars a year. Their good sense sparked an oil rush in California, leading to 2,300+ wells to be constructed within the city. Due to their enterprise, more than 75 million barrels of crude oil was pumped from this urban land.

But Doheny's oil empire didn't stop in California; in May 1900, Doheny and Canfield went prospecting in Mexico. Outside of Tampico they struck oil, bought up 400,000 acres of jungle, and produced 80 million barrels of crude over 9 years, operating as the Mexican Petroleum Company.

Producing enough oil to rival only John D. Rockefeller, Edward L. Doheny was one of the richest men in the world by the early 1920s.

In his book, Material Dreams: Southern California Through the 1920s, Kevin Starr refers to Doheny Sr. as too different to be assimilated, too wealthy to be ignored. "

Though not from old money, " or educated by one of the prestigious eastern colleges, Doheny was a powerful man both in the Catholic Church (husband and second wife Estelle became Knight and Lady of the Equestrian Order of the Holy Sepulchre in 1925) and politics. Doheny's reach went so far as to affect president Warren G. Harding's administration.

In 1921, Doheny gave the Secretary of the Interior, Albert Bacon Fall, a $100,000 "no-interest loan", for which Doheny then obtained a lease and drilling rights for 32,000 acres of government-owned land near Taft, California, known as the Elk Hills reserve. Fall also provided a favorable lease at the Teapot Dome to Harry F. Sinclair.

The Teapot Dome Scandal was the biggest political scandal in U.S. history until Watergate in the 1970s.

In 1927, the Supreme Court ruled that the oil leases had been corruptly and fraudulently obtained. The court invalidated the leases and returned the land to the Navy. In 1929, Albert Fall was found guilty of accepting bribes from Doheny. In 1930, Doheny was acquitted of paying bribes.

Doheny had one son, Edward L. Doheny Jr., (known as Ned), whom he adored. Ned married Lucy Smith of Pasadena, California in 1914, and the couple had 5 children together. In the 1920s, E.L. Sr. commissioned architect Gordon Kaufmann to design a mansion for his son and his family.

The house built on the eastern edge of Beverly Hills called Greystone because of its construction out of gray stone was the largest house in LA at the time and remains a thing of legends today.

It took several years and several million dollars to build the mansion. It was completed in late summer of 1928 and the family (and staff) moved in during the fall of that year. However, Ned didn't get to enjoy his dream home for very long before tragedy struck.

Ned, like his father, was in trouble with the Feds for his partition in the Teapot Dome Scandal. And not just Ned his confidant, secretary, and retainer, Theodore Hugh Plunkett, was also in trouble. The $100,000 that was given to Secretary Fall was personally delivered in a black bag by Ned and Hugh. And that bag and its contents were under investigation.

As the date to testify in Washington drew nearer, the reality of the situation began to settle in. Who would take the fall? Certainly not either E.L. Sr. or Ned but Plunkett? He was guilty by association, and it could be argued that due to his close ties with the family, he acted on his own.

The pressure kept building in Hugh, according to the official story. His behavior became unhinged so much so that his old pal Ned suggested temporary institutionalization. But his behavior only became more erratic.

The Tragedy at Greystone

It was a Saturday night in February 1929 when Hugh's behavior took a turn for the worst.

On February 16, around 9:30 pm, Hugh drove over to Greystone mansion, the house Ned and his family had been inhabiting for only 4 months. Because he was a regular fixture in the family, the gatekeeper let him onto the property and Ned let himself into the house using his own key.

But exactly what happened after Hugh drove up to the house remains relatively unknown. Evidently, he made his way to a bedroom in the east end of the house. According to news reports, while in that room, Hugh used the switchboard to call Ned, who was in another part of the house, asking if they could talk.

What happened when Ned met Hugh in that bedroom remains a mystery. According to the newspaper accounts, Lucy Doheny heard a gunshot around 11 pm. However, she didn't look for the source of the sound but instead called the family doctor, Dr. Ernest Clyde Fishbaugh. Together, Lucy and Dr. Fishbaugh approached the bedroom in the east wing where Hugh had called Ned. Then Hugh went back to the room and they heard a second gunshot. This was about 20 minutes after the first gunshot.

A Case of Murder/Suicide?

At this point, things get a little fishy.

Witness testimony says that Plunkett told everyone in the house to not come any closer to the bedroom. At first, Dr. Fishbaugh said that Hugh shut the door softly; however, he later recalled him slamming the door in rage. Testimony from the staff also sounded a little too neat, perhaps rehearsed a possibility given that the police weren't called to the scene until 3 hours after the first gunshot.

When investigators did arrive, they found Doheny dead on his back in his underwear and silk bathrobe with a gunshot wound in the back of his skull. Hugh was found dead spread-eagle on his stomach a large pool of blood was beneath his face, caused by a GSW to his head, and an unfinished cigarette was still trapped under his fingers. In fact, the cigarette had burned the fingers on his left hand.

The gun, a Bisley .45 Colt Revolver, was found underneath Hugh's body.

Evidence at the scene indicated that both men had been drinking. Powder burns were found around the wound on Ned's head, but no evidence of powder burns was found on Hugh's body. This evidence pointed away from the story that Hugh killed Ned and then killed himself. It was later admitted that the bodies had been moved before the police arrived.

Two days later, the local DA's office closed any and all inquiry on the case. It was officially concluded that Hugh Plunkett shot and killed Ned Doheny and then killed himself. A half hour later.

Ned Doheny wasn't buried in family plot in the Catholic cemetery, but rather at Forest Lawn in Glendale. Hugh Plunkett's body was buried in the same cemetery--just a few yards away from his pal Ned. The newspapers never published anything about Ned and Hugh's involvement in the bribery of Albert Fall. However, stories did arise regarding the two men being in a relationship--and that their quarrel and deaths pertained to such.

Because the sympathy for E.L. Doheny Sr. was so great in Washington, the Congressional Investigation was ultimately called off and he never had to testify. Six years later, Doheny Sr. died supposedly of a "broken heart."

Almost exactly a year after the incident, widowed Lucy married a man named Leigh Batson. They lived in Greystone for 26 years. in 1955 she decided the house was too big and built a smaller house. The city of Beverly Hills took over ownership of the property. Lucy Smith Doheny Batson lived to be over a hundred. Her grandchildren recalled that at the end of her life she would wake up each morning, dress for a luncheon engagement, and sit in a wingback chair in her living room with her purse. And wait.

What exactly happened at Greystone on the night of February 16, 1929, may never be known. The mystery that surrounds the circumstances that night leave plenty to the imagination and have inspired a number of theories. Were Ned and Hugh really a couple? Was there a lover's quarrel? Did Lucy discover their relationship and kill them both out of revenge? Was Hugh ready to testify against the Doheny family? Did Ned Doheny kill his friend to silence him, and then kill himself out of guilt? Was there a hitman? For as juicy as this murder seems today, there wasn't much written about it in the papers at the time, which only further convinces some that a major cover-up occurred.

Either way, the ghosts don't seem to have lingered for too long in this Beverly Hills estate. Today the mansion is a park, which you can visit. Or shoot a movie in.