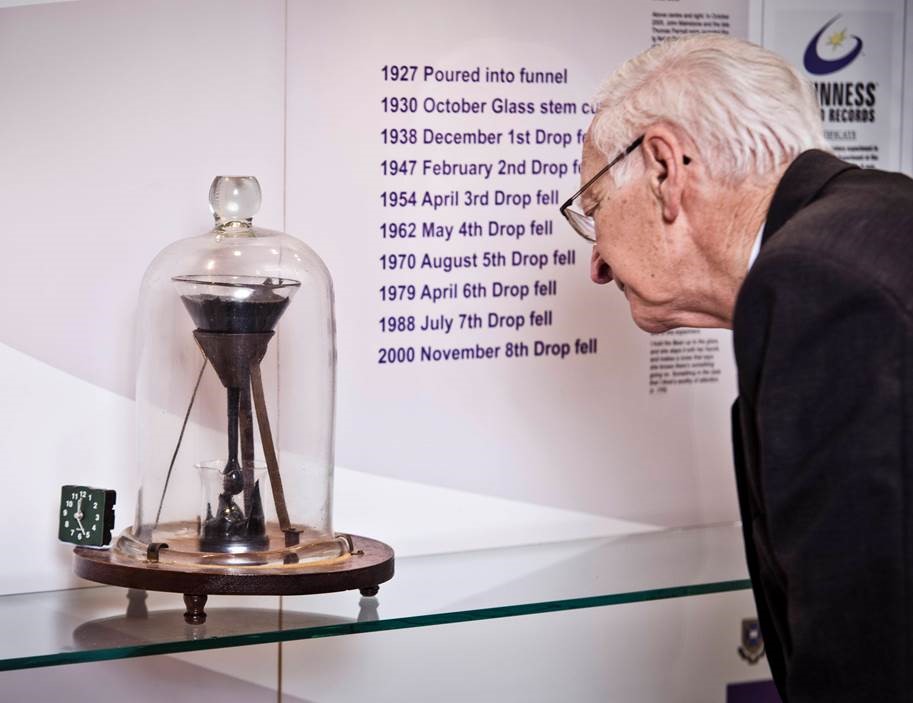 You might find it hard to believe, but there is a science project that's been —ongoing since 1927 at the University of Queensland in Brisbane, Australia.

Known as the Pitch Drop Experiment, scientists and observers have been watching pitch (also known as tar or asphalt) drip from a funneled container into a beaker -- with each drop taking years to form and separate.

Pitch is commonly derived from 3% of a barrel of oil, and consists of a hyper-viscous texture that appears to be a solid, but is actually —a fluid. As a matter of fact, the pitch used in this famous experiment has a viscosity that is 230 billion times that of water's. In other words, IT'S THICK!

The Pitch Drop Experiment was started by Professor Thomas Parnell when he poured heated, thinned pitch into a sealed funnel and allowed it to cool for three years. He then cut the seal at the neck of the funnel and allowed the pitch to begin flowing.

Ever since, the container has been encased in a glass dome on the University of Queensland campus -- nabbing the Guinness world record for longest running laboratory experiment in the process.

A: After the 7th drop, air conditioning was added, causing temperature stability.

The tenth drop isn't expected to fall for about another 14 years, but if you'd like to see a live stream of the experiment for yourself, just click here.