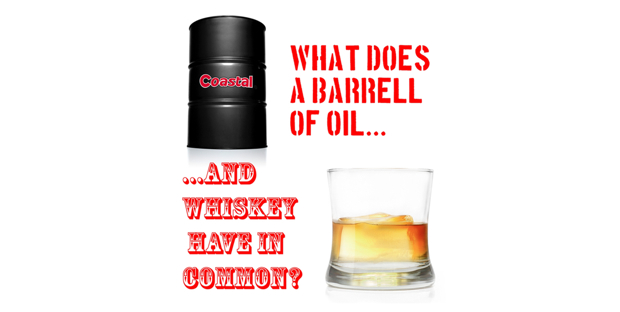 Why are there 42 gallons to a barrel of oil? Doesn't 42 gallons seem like a strange number when 55 gallon drums are so prevalent today. It turns out that this number was dictated in Pennsylvania, the birthplace of modern oil production and the first oil boom, in the mid 19th century. How does whiskey come into the picture? As a matter of practicality oil men chose the 42 gallon barrel because it was the standard container size at the time for things like whiskey, wine, and molasses. Today the oil barrel is known as a unit of measure in commodities trading and no longer takes on a physical form. Below is the full explanation and history from the the American Oil & Gas Historical Society.

A handful of America's earliest oilmen met in Titusville, Pennsylvania, and agreed that henceforth, 42 gallons would constitute a —barrel " of oil. It was August 1866 and Pennsylvania led the world in oil production.

Although pipelines challenged the oil region's teamsters, the business of moving oil depended mostly on men, wagons, horses, and barrels. To reach railheads and docks, teams of horses pulled wagons carrying as many as eight oil barrels. As oil derricks multiplied, entire forests were reduced to barrel staves by recently introduced barrel-making machinery. — — Hoop mills operated day and night supporting cooperages that sprang up to join in the oil boom. So, why did early oilmen choose the 42-gallon barrel?

Long before England's King Richard III defined the wine puncheon as a cask holding 84 gallons and a tierce as holding 42 gallons, watertight casks of many sizes were crafted by —tight " coopers in the manner prescribed by their guild, the Worshipful Company of Coopers. Lesser skilled craftsmen (known as slack coopers) made casks, barrels, and pails for dry goods.

By around 1700, Pennsylvania statute, practical experience, and custom had made the 42-gallon watertight tierce a standard container for shipping everything from eel, salmon, herring, molasses, soap, butter, wine and whale oil. The 42-gallon barrels became familiar 19th century containers.

Then came Edwin Drake's 1859 discovery and the first oil boom. It consumed tierces, whiskey barrels, casks and barrels of all sizes. When filled with crude oil instead of fish or other commodities, a 42-gallon tierce weighed over 300 pounds — about as much as a man could reasonably wrestle. Twenty would fit on a railroad flatcar. Bigger casks were unmanageable and smaller were less profitable.

Contemporary photographs show cooperages' prodigious response to the new demand. Within a year of Drake's discovery, oil barrels were commonly considered to hold 42 gallons according to —The Oil Fountains of Pennsylvania " in Littells' Living Age of September 1860.

By 1866, these abundant tierce-sized barrels were the logical choice to become the industry's standard measure. The 42-gallon standard was adopted by the Petroleum Producers Association in 1872 and by the U.S. Geological Survey and the U.S. Bureau of Mines in 1882.

John played varsity football for Titusville High School as a guard on the 1884-1886 varsity teams. He graduated in 1887 and went on to become the legendary football coach for whom the Heisman Trophy is named.