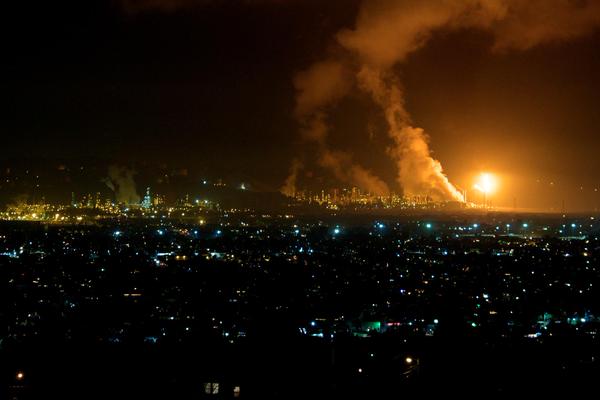 A few days before Christmas 2014, the San Francisco Bay Area was shocked to find a fire lighting the nighttime sky.

Citizens worried that the source of the blaze was the Chevron oil refinery located in the community of Richmond, CA, as it once caught fire in the past. While it turns out that the fire was indeed coming from the Chevron plant, it just so happened that it was all a part of operations. The flare was actually a demonstration of the refinery's safety measures working as they are supposed to.

It's something we've seen in film or television, with stacks on top of buildings expelling fire like oversized blowtorches, but what is the reason behind it?

In the case of the San Francisco Chevron plant, a machine that cools a solvent de-asphalting unit malfunctioned and led to the fire emitting from the stacks. In a lot of instances where machinery doesn't work properly, pressure levels in refineries will rise so much that the levers in control of them will open in order to release the backup happening inside. More often that not, this results in highly flammable gases being released as a fire.

It's worth pointing out that flares such as these could be necessary at any given time during the refining process —— resulting in different flames depending on the type of work being done. Some of them burn big and bright, such as the one in this plant's case. Others are more-or-less invisible to the naked eye, occurring as a release of gas.

In spite of the risks associated with burning highly pressurized materials, flaring is strictly regulated to make sure that air quality standards are being met, and there is nothing inherently dangerous about the flames that oil refineries emit in these circumstances.