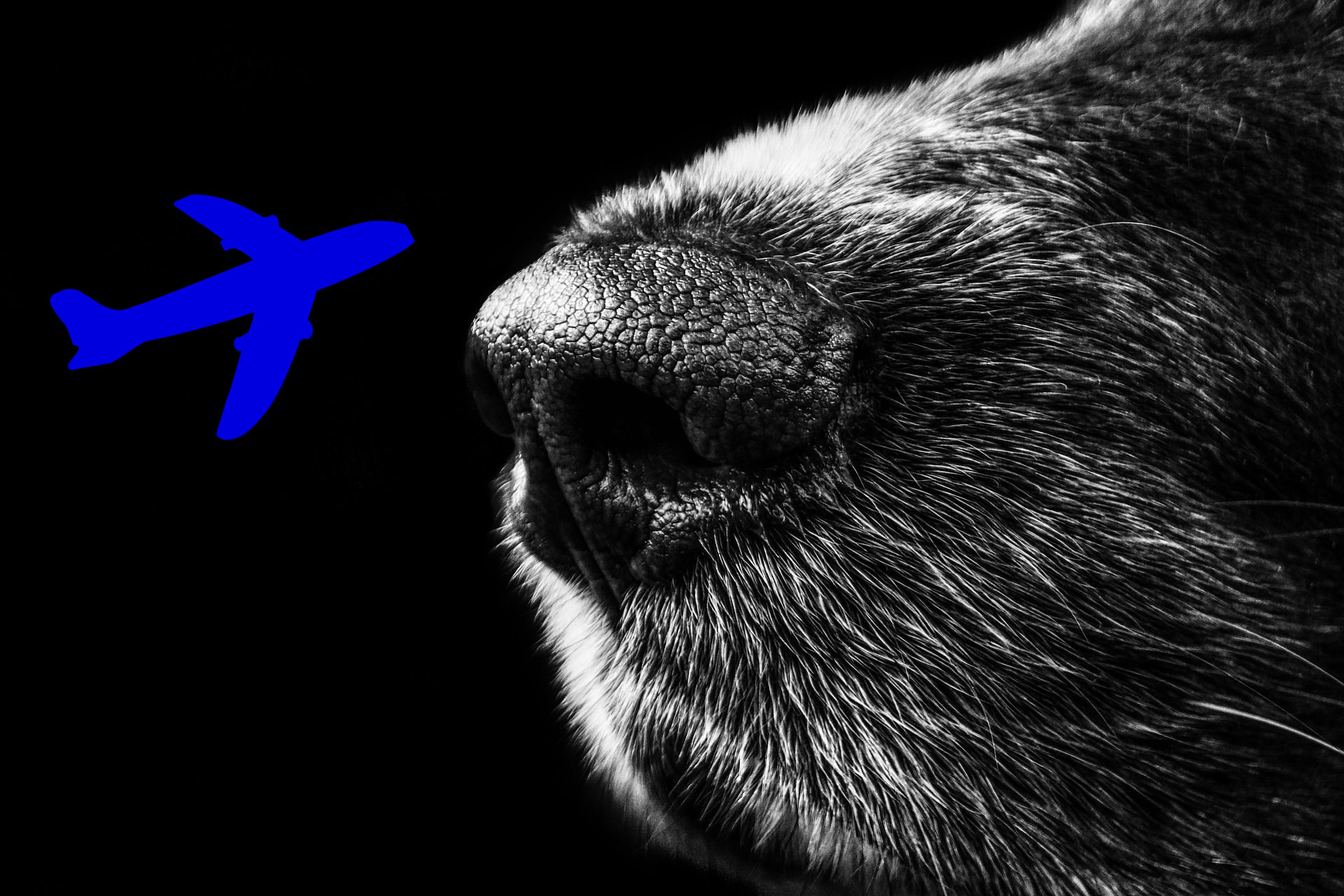 There probably aren't too many people who say that their favorite part of travelling is being at the airport. No, airports are busy and crowded and stressful (at least the big ones are, especially during the holidays). I'm going to go out on a limb here and say that no one actually enjoys the lines, the crowds, and the TSA checks, not to mention the stress of other passengers whose own high levels of anxiety might send yours through the roof just by being in close proximity to them.

It might be relieving to know that you are not alone, and that people do recognize the stress inherent with travel (any kind of travel, really, but air travel in particular).

Some airports are working to cut back on traveler stress by employing everyone's best friend: Dogs.

The Los Angeles Airport might be the biggest (or at least most well-known) airport to offer free therapy in the form of canines. The LAX Pets Unstressing Passengers (PUP) program has been providing stress relief, comfort, and an overall enhanced costumer experience to travelers for over 2 years.

These therapy dogs and their handlers (no, the dogs don't fly solo) roam the departures levels in the gate areas of each terminal. By stopping and visiting passengers awaiting flights, the dogs provide comfort and absolute cuteness while their handlers educate by providing information regarding LAX projects and construction-related traffic impacts.

These dogs who volunteer at LAX are not just random puppies found on the street (although we might not mind it so much if they were). According to the LAX PUP program fact sheet, the dogs must be privately owned and at least 2 years old (so unfortunately no technical puppies are allowed, although dog owners know that all dogs are puppies at heart).

The Pup volunteers must have at least one-year experience working with a recognized dog therapy organization, and must be registered (along with their dog) with Alliance of Therapy Dogs. Each volunteer also goes through LAX classroom and in-terminal training and must complete a walk-through with their dog to determine whether it's a good fit. Only the best pups and people get to participate in the program.

Other airports are also bringing in dogs to comfort passengers, too (about 30, actually). The Lehigh Valley International Airport in Allentown, Pennsylvania launched their very own C.O.P.E. (Canines Offering Passengers Encouragement) Therapy Dog program. Sacramento Airport also started a Certified therapy dog program in 2013. The dogs wear navy blue vests that say Pet Me " and are part of an effort to make the airport experience a more enjoyable one.

Not every dog you encounter at the airport is going to wear a friendly Pet Me " vest; in fact, you might encounter one in a harness that explicitly states Do Not Pet. " Here's a hint: do not pet these dogs. While these dogs may also be at work in the airport, unlike their therapy dog counterparts, their number one goal is safety.

You might already know that a dog's nose is way more impressive than either yours or mine (no matter how strong a feature it is on your face). A dog's sense of smell just blows human noses out of the water by being between 10,000 to 100,000 times as acute as a human's. For example, when we walk into the kitchen, we might smell chicken noodle soup cooking on the stove. But a dog? A dog can smell each individual ingredient, from the chicken to the celery to the pinch of black pepper you threw in there. But that's just a very, very small example; Alexandra Horowitz, a dog-cognition researcher at Barnard College, writes in her book, Inside a Dog, that a dog could detect a single teaspoon of sugar in the equivalent of 2 Olympic-sized pools worth of water.

--And you wonder how your dog knows you brought home groceries?

The nose really knows, which is why dogs are increasingly being employed for their best feature. And while dogs can be trained to detect all kinds of things (cancer, drugs, missing persons, etc.), airports are particularly interested in dogs' ability to sniff out bombs.

Government and law enforcement agencies have been employing dogs and their superhuman snouts for decades; however, TSA has only recently (as in about 5 years ago) shifted doggie employment to include passenger screening. Before this, dogs working in airports were mostly used for jobs such inspecting cargo, aircraft, cars, etc., and with Customs and Border Protection searching for banned and undeclared goods. Now more than 140 canines patrol security checkpoints at over 35 airports.

Now some TSA K-9s sniff out bomb making materials on people walking through the airports and also help clear passengers for PreCheck. The dogs are tested regularly with decoys and suspicious substances to keep them on their toes or rather, their nose. Are you picturing vicious, muscular, or militant-looking police dogs? A snarling German Shepherd or a snapping Belgian Malinois, like what you see on TV? Don't be (although GSDs and Malinois are both terrific companion dogs, too!). The TSA K-9s you might encounter aren't quite the same as many military/police K-9 units. These dogs are not trained to frighten you, per se (although you still don't want to mess with them).

Apparently many of the breeds used for such work are floppy-eared " and don't intimidate. " Popular breeds for this line of work include Golden Retrievers, German Shorthaired Pointers, and Labs common family-type dogs. But just because they're cute and cuddly looking, do not pet these dogs . . . you wouldn't scratch behind the ear of one of the human TSA workers, would you? It's the same thing. If you are really intent on getting your hands into the fur of a TSA dog, though, don't lose all hope: In November 2015, the Transportation Security Administration released a statement that they are looking for people to adopt dogs who have either retired or have, in some way, not succeeded their explosives training (the flunkies). Any available dogs are located in San Antonio, Texas, and would require thorough screening and travel to Texas. For information on adopting a dog through this program, visit the Transportation Security Authority Administration website here.

While pooches might be the most common animal seen working these types of gigs, there are increasingly more animals than just dogs with jobs at airports. For more outdoor-type work (such as landscaping), some airports are turning to our cloven-hoof friends to help for their economic, operational, and environmental benefits. Both O'Hare (Chicago) and PDX (Portland) are known as having hired some outside contractors to assist in grass cutting and weed-management.

Since 2013, O'Hare has hired herds of more than 40 grazing animals to clear dense shrub vegetation on the airport's property.

The animals in question? The herd's been comprised of goats, sheep, llamas, and burros borrowed from Settler's Pond, an animal rescue facility in Illinois. According to the Chicago Department of Aviation, the grazing helps eliminate habitat for birds and other wildlife that can pose safety hazards for the airport. But don't worry about the animals themselves! The herd is separated from the airfield by security fencing. In 2014, the CDA expanded its partnership with USDA Wildlife Biologists to quantify results and benefits of the grazing herd through a formal research project.

In 2015, Portland Airport hired a team of 40 goats and 1 llama to combat invasive plant growth and predators (coyotes) disturbing workers and guests. The goats (and 1 llama) were hired through Goat Power for a little over 3 weeks to munch down on the blackberries, thistle, and scotch broom, all weeds which goats are not opposed to munch on.

In case you're wondering about the solo llama, his job was to help the shepherdess in protecting the goats from the coyotes. They were contained to their work zone " by a portable electric fence, preventing them from wandering around the airport. Besides their 40 rented goats (and 1 llama), PDX utilizes police dogs and a Border Collie (named Fish) to keep geese and other birds away from the airfield.

Some airports are looking into all kinds of ways to employ animals (and their natural talents) to make traveling not only a safer, more pleasurable experience, but also a more sustainable one, as well. So the next time you decide to travel via airport, keep your eyes out for some of our fine furry friends on the ground just make sure you only pet the ones who are employed for such a task.