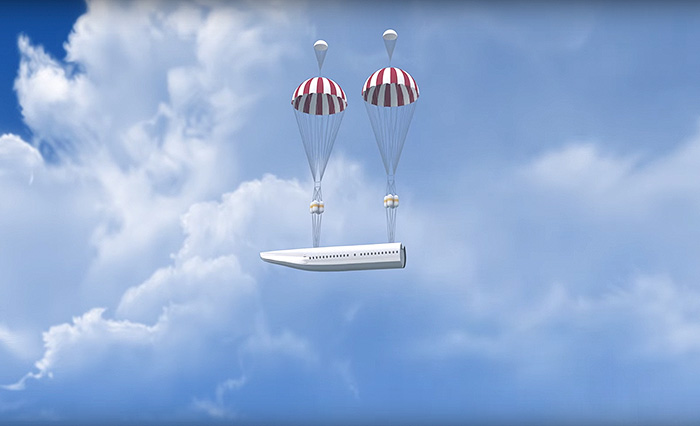 Is a detachable cabin a detachment from reality?

Throughout the past week or so, social media platforms have seen an influx of shares regarding a drastic design for a "safer" airplane. The safety feature in question? A detachable cabin meant to protect passengers and cargo in the event of an emergency.

You might be asking yourself, is this real? Or is this just fantasy?

Frankly, it's both— well, sort of. The design is real in that a living, breathing inventor named Vladimir Tatarenko has been working on the design for the past three years. It's real in the way all inventions and dreams are real in the abstract sense (or even in a slightly more physical sense if the design in question has been patented). This design, however, will remain a work of fiction unless some investors with money-laden pockets come out of the woodwork of the internet.

In his YouTube video demonstrating his idea, Tatarenko quotes both Einstein and Confucius:


—Life is sacred, that is to say, it is the supreme value, to which all other values are subordinate. " -Albert Einstein

He, who saves a single soul, saves a whole world. " -Confucius

That's some heavy, heartfelt stuff to open a one-and-a-half-minute-long simulation— a move, no doubt, meant to tug at the heartstrings of the countless potential viewers who already fear being subjected to the minor probability of a fatal plane crash. Fears of flying (and subsequently fears of crashing) continue to be prevalent in American society, despite the safety of modern-day aviation.

The Chapman University Survey of American Fears is one form of insight into the psyche of the American public. The —Wave 2 " of this study was conducted in April 2015 with a random sampling of 1,541 adults across the country. These individuals were asked their level of fear regarding 88 different fears, ranging from crime, personal anxieties, technology, to natural disasters.

Of the individuals questioned, 15.2% considered themselves —afraid or very afraid " of flying, which was considered a personal anxiety. Of the 88 fears, flying was ranked 60 th; less feared than Obamacare, water, and loneliness, flying was ranked as more fearsome than gangs, rape, and clowns. These findings can say a multitude of different things about American culture, but one thing it definitely demonstrates is that flying is still a concerning phobia for many.

And it is exactly this kind of phobia which propels Tatarenko's idea into the spotlight and into everyday conversation.

There are many questions that need to be asked regarding Tatarenko's design: questions such as cost, practicality, and functionality. But the issue addressed here is whether this change is even necessary to begin with.

Safety is key in all technological innovations. Safety is marketable, but it can also be costly. Regarding Tatarenko's plane, one must consider the cost of such an idea (feasibility aside) and place a value on it.

While Tatarenko appeals to the emotion of the flying-phobic, modern day aviation is already extremely safe.

But wait, you might say, what about 2014? Wasn't there a particularly high number of airplane crashes and deaths? It's true that 2014 was a year with some questionable incidents. Within a week's time there were three airline crashes: the shoot-down of Malaysia Airlines Flight 17 in Ukraine on July 17; the crash of TransAsia Airways Flight 222 in Taiwan on July 23; and the crash of Air Algerie Flight 5017 in Mali on July 24. Within seven days, approximately 462 individuals lost their lives. Not to mention the disappearance of Malaysia Airlines Flight 370 in March 2014 with 239 individuals on board.

The Aviation Safety Network, which is a service of Flight Safety Foundation, has made it its mission to provide complete and reliable authoritative information on airliner accidents and safety issues. They have provided a charted account of the total commercial aviation deaths per year, from 1946 to 2015:

While the general public might be under the impression that flying is getting more dangerous, the truth is that safety has improved exponentially since the advent of modern aviation in the 1940s. Four planes and 700 people might sound like a high statistic, but considering the amount of air traffic that occurs globally on a daily basis, the chance of being in a fatal aircraft accident is very low.

To put it into perspective, according to IATA, more than 3 billion people flew safely on 36.4 million flights in all of 2013. Of those flights, there we 81 accidents (16 fatal) and 210 fatalities. Just for some comparison, in the same year, 124,149 reportable traffic crashed occurred in the state of Pennsylvania, 1,208 of which were fatal. Statistically speaking, the most dangerous part of flying in an airplane is driving to the airport.

"No chance for salvation"?

Ok, so flying is safe, right? But what does that have to do with Tatarenko's design? And isn't it better to be overly cautious (and overly safe)? While Tatarenko claims that 95% of the people he questioned would buy a more expensive ticket for the added safety, there is no actual guarantee for added safety. And even if it did increase safety, would it even be by a noticeable margin, considering the already minor probability of a crash?

It's unclear whether there would be any control of the parachuted cabin once it's released from the rest of the plane, meaning there's nothing to stop it from landing in a heavily populated area. Could attempts to avoid a loss of lives result in added fatalities?

What would prevent someone from jumping the gun and releasing the pod when it isn't necessary? What would occur under the circumstances of mechanical failure? What if the pod separated accidentally? What happens to the pilots?

The design is certainly an interesting concept, one that bears similarities to science fiction. And while the concept of detachable airplane pods is not unheard of (Airbus recently patented a concept for boarding and unloading passengers via a removable cabin module), it seems to be an extreme measure (in both cost and complexity) for scenarios which are, statistically, rare.

Aircraft engineering and design conjecture aside, Tatarenko's concept of a jetliner with a detachable passenger cabin seems likely to remain a merely theoretical work of fiction, if solely for the fact that the need for it doesn't really exist.

To read more about The Chapman University Survey of American Fears, check it out here on their blog: — https://blogs.chapman.edu/wilkinson/2015/10/13/americas-top-fears-2015/