What do spiders and hydraulic presses have in common?

If your immediate thought is something along the lines of crushing (because spiders are creepy crawly little monsters that most people smoosh with their shoes), I'm not going to be the one to tell you that you're wrong, per se, but I'm certainly not going to say that you're correct, either.

The answer we were looking for is actually hydraulic pressure.

Just for a little refresher, hydraulic systems generate, control, and transmit power through pressurized liquids. Hydraulic fluids can only be compressed to a certain point— beyond that, the added pressure builds up in the enclosed space, generating force. This force is able power various kinds of industrial equipment, crush various objects with a hydraulic press for Youtube viewing pleasure, and power spider legs (uhh ...one of these things is not like the others?). 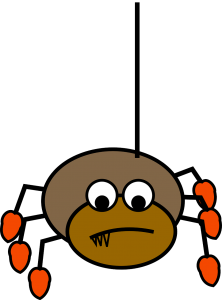 Spiders: though they be but little, they are terrifying.

There's just something about the way they look, the way they move, that gives most of humanity the willies. Spiders are creepy-crawlies that don't even seem to creep or crawl; rather, they scuttle rather jerkily, almost robotically. According to scientists, it is this precise kind of movement (coupled with their looks) which causes people to fear spiders so.

This unique robotic movement comes from spiders' —unique hybrid propulsion system. " Spiders don't have extensor muscles in their major leg joints, which means their legs don't work the same way as most living, legged beings do (including other arthropods): almost all other limbed animals have both flexor and extensor muscles, which produce much smoother leg movements. Spiders just have to be different.

While pressure may be pushing down on you (and/or down on me), hydraulic pressure is inside those 8 spindly spider legs to push 'em outward. — — —

Spiders can naturally flex their limbs inward using their flexor muscles, but to push their legs outward (to run, jump, and move out from behind the refrigerator when you're looking for a midnight snack), they rely on hydraulic pressure in the absence of extensor muscles.

Spiders have 2 body parts: the cephalothorax (head and middle) and their abdomen. If you've ever looked closely at a spider (although why would you?), you might have noticed that all 8 legs are attached to the top part (the cephalothorax). This is important, because outward leg movement is controlled through the cephalothorax. 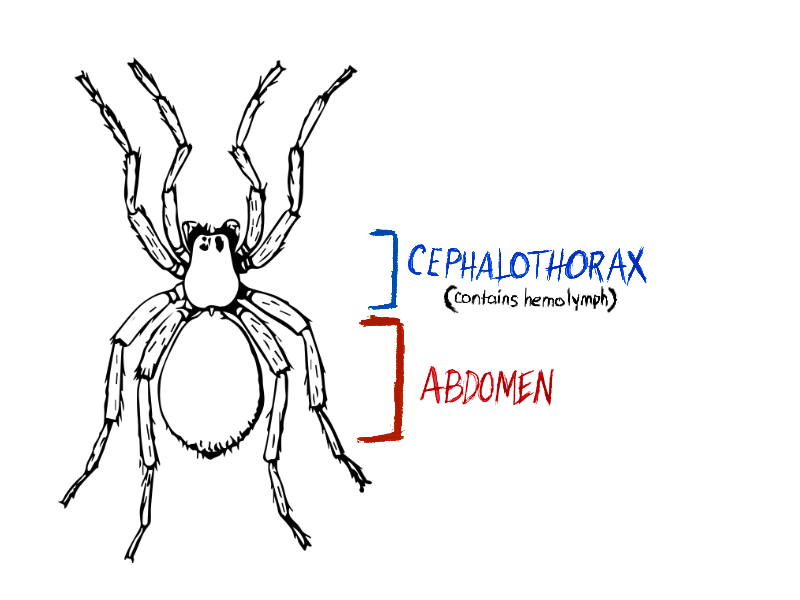 Just in case spiders didn't need to seem any creepier, their bodies are filled with a fluid called hemolymph (although it's found in most invertebrates and not just spiders). In order to move about, spiders rapidly increase the pressure in their cephalothorax. The increase in pressure sends the hemolymph flowing to the legs, causing them to stretch outwards. When spiders move, they naturally increase and decrease body pressure (all to better scare the pants off of you). 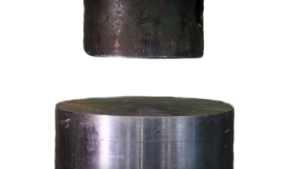 As with any hydraulic system, proper function requires adequate pressurization, and spiders are no different: if their cephalothorax is punctured, or if they lose a leg, they are at risk for losing pressure. This would severely inhibit movement. Ever wonder why dead spiders' legs curl inward? Contrary to popular belief, it has absolutely nothing to do with being a wicked witch, and everything to do with system pressure: —the hydraulic system has been taken completely offline, while the flexor muscles go into rigor mortis. "

While many of us might long to crush spiders whenever we encounter them, especially when we find them in our homes (gasp!), they are living, breathing things that just want to spin their webs and eat mosquitos. Plus they offer an interesting benefit to science and technology, including the application of spider hydraulics to robots that can explore beyond human reach. So the next time you see a spider, remember that they are fascinating little buggers that are very much like little industrial machines. Just remember: hemolymph is not a proper substitution for high-quality hydraulic oils.

Just imagine if there was a superhero that —benefited —from having hydraulic spider legs ... he could jump really high and no one would want to mess with him (so —alternatively a great —super villain, then).