Something to Chew On:

Gum is everywhere it's sold at just about every location and can easily be found stuck to the bottom of your shoe, under your desk, in the mouth of the person sitting next to you at the DMV who appears to be physically unable to shut their mouth and stop snap, cracking, and popping their gum in your ear! *

Gum is a popular confection, for children and adults alike (although it's safe to say that a majority of kids probably had to face gum bans " in school) and is used for a variety of reasons, from dental health benefits to quitting smoking.

Apart from the myth that swallowed gum will remain in your stomach for seven years, have you actually put much thought into what gum is, or how it's made?

Chewing gum (or gum equivalents) has been around for a long time at least 100,00 years! Evidence of 5,000-year-old chewing gum made from birch bark tar (complete with tooth imprints) was discovered in Finland. Ancient Greeks chewed gum made from the resin of mastic trees. And may other cultures have chewed chewy substances through the centuries made from various plants, grasses, and resins.

American Indians chewed resin made from the sap of spruce trees, which inspired New England settlers to do the same; a man named John B. Curtis was the first person to commercially manufacture a chewing gum in 1850, called The State of Maine Pure Spruce Gum. A few years later a gum made from paraffin wax become more popular.

The 1860s saw the first flavored chewing gum (created by John Colgan and flavored with tolu, a powder obtained from balsam tree extract), as well as the advent of what we can consider modern " chewing gum.

Early modern gum (quite the oxymoron, I know) was made using chicle, a natural gum collected from several species of trees. Chicle was originally brought to the US from Mexico by former president, General Antonio Lopez Santa Anna, to Thomas Adams, who cut it into strips and marketed it as Adams New York Chewing Gum in 1871 (Fun fact: chicle was used as a gum because it wasn't an effective rubber substitute for tires).

Current modern gum is mostly made from synthetic substitutes for natural rubber--namely butadiene-based synthetic rubbers. Isobutylene is an olefin petrochemical that is generally manufactured from feedstocks in a petroleum refinery or chemical plant. Isobutylene is an isomer of Butene (a C4-olefin), obtained as a heavy co-product of naptha cracking to produce ethyolene. The material used as a base for chewing gum is High-Purity Iso-Butylene (HPIB).

Besides the gum base, other common ingredients in gum include a sweetener (natural sugars or artificial sweeteners), flavoring, preservatives (ex. Butylated hydroxytoluene), softeners (ex. Refined vegetable oil), and fillers (ex. Calcium carbonate or corn starch). Chewing gum manufacturers are not required to disclose the specific contents of the gum base " or flavors, as these are considered part of a trade secret formula.

There is a difference, you know and it's particularly noticeable if you're into bubble blowing.

The first attempt to make bubble gum " occurred in 1906; however, the so-called Blibber Blubber " (try saying that 10 times fast) failed to win consumers with its wet and grainy texture. It wasn't until 1928 when an acceptable " bubble gum hit the market. You can thank Walter E. Diemer (an accountant for the Fleer Chewing Gum Company) for experimenting with new gum recipes and creating Dubble Bubble " (named for its stretchy texture).

To make gumballs, manufacturers store the balled gum for several hours at 55-60 degrees Fahrenheit so they harden. Then they are put into kettles for a seven hours and coated with a flavored and colored sucrose solution. The coated balls are dried again and rolled in beeswax (or another wax) to make them shiny.

Gum in not water-soluble, and cleaning up unwanted gum (off of sidewalks, benches, handrails, etc.) is a labor-intensive process--especiallywhen once it has been stepped on and dried. Gum is particularly difficult to remove from asphalt and rubber-soled shoes because they are all made from polymeric hydrocarbons. That being said, don't try chewing your shoes as an alternative to gum. Just don't. 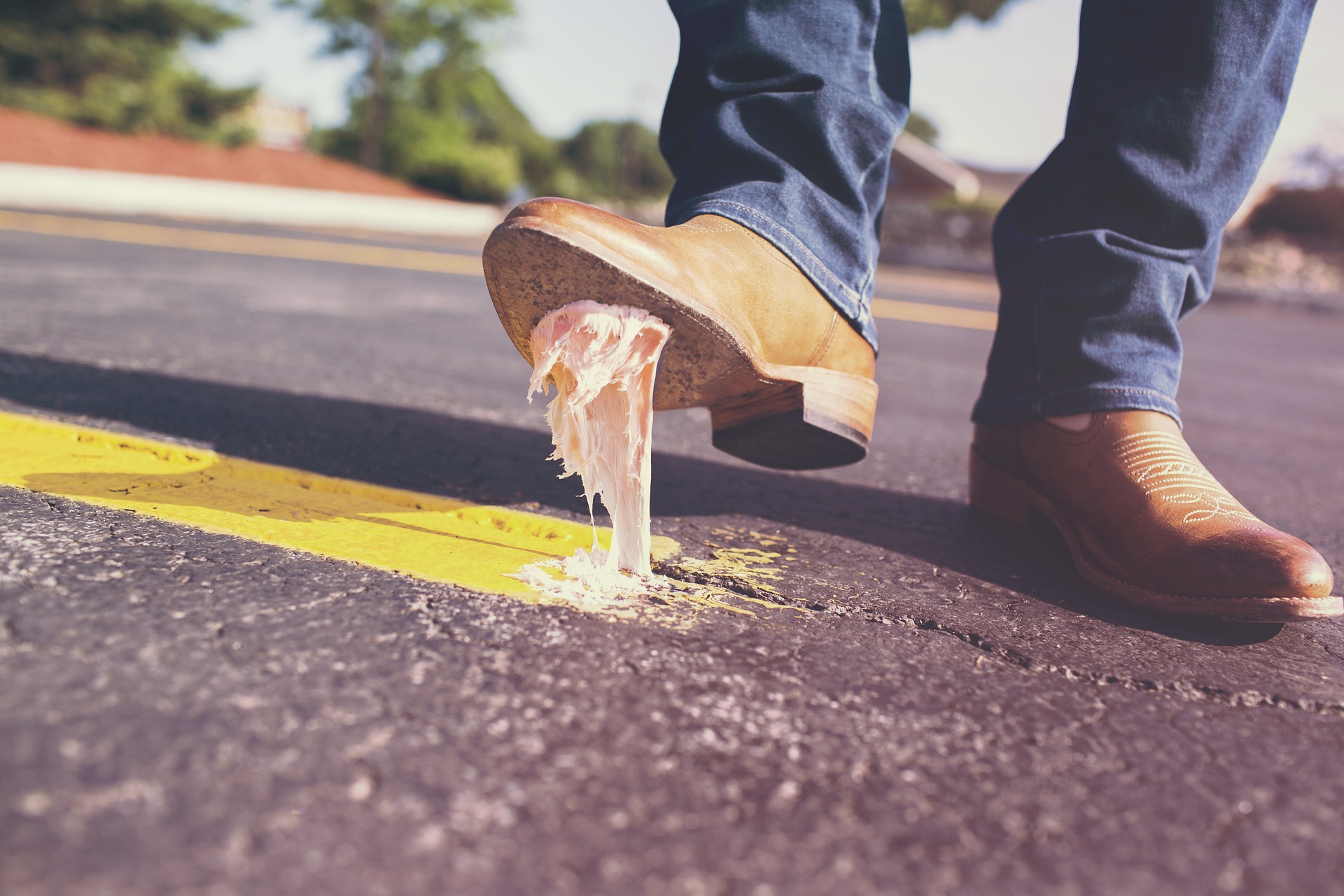 * Littering is bad. Obnoxious gum chewing/cracking/popping in strangers' ears is bad. Please be responsible with your gum!