Porta-potty. Port-a-john. Jiffy-john. Honey pot. Porta-loo. Toi-toi ... No matter what you call them, your business is their business.

Nobody likes portable toilets. And those that do have clearly never had to use one at a music festival or county fair.

In a world of smart toilets that offer futuristic flushing, self-cleaning features, foot warmers, and Bluetooth capabilities, porta-potties certainly seem like the worst de-evolution ever no more high tech than an old-fashioned outhouse, right? Wrong.

While portable toilets might not seem like much compared to modern first world standards of living and, uh, sanitation, they're actually pretty impressive. And not that old. And not the same thing as an outhouse. Outhouses are semi-permanent structures that have been around for a very long time. Porta-potties, on the other hand, are portable, self-contained units where waste is temporarily stored and then later removed. These are less than a century old. 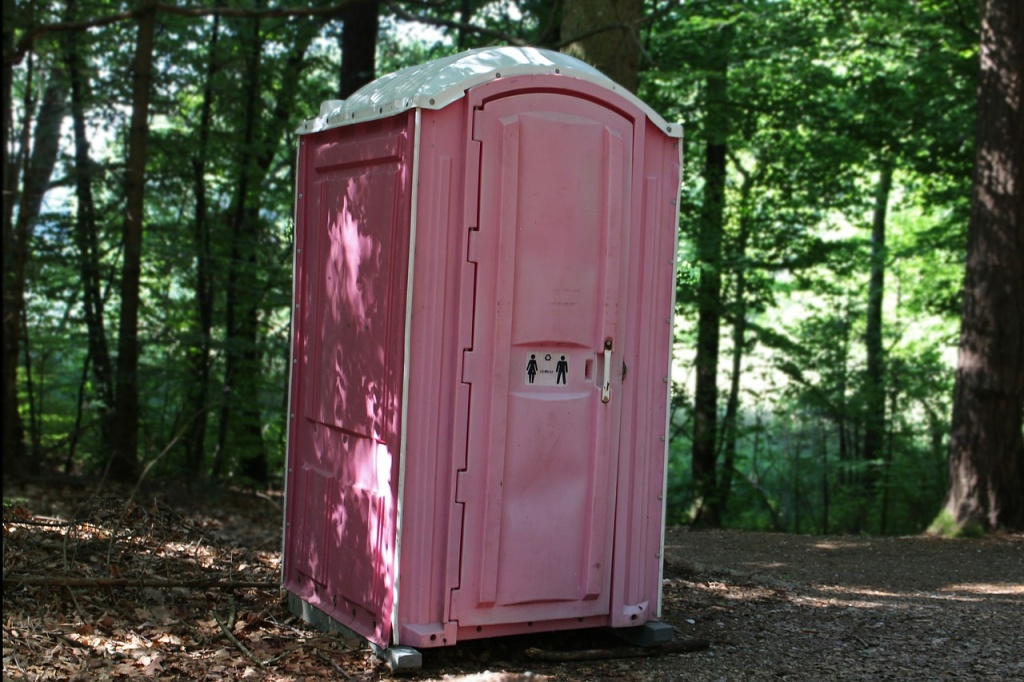 The History of the Portable Toilet

Like so many other inventions of the 20th century, the birth of the porta-potty has everything to do with World War II. The onset of war spurred an increase in the construction of military bases, industrial operations contributing to the war effort, and an increase of people relocated to areas of inadequate infrastructure.

When you increase the number of bodies working and/or living in an area, you naturally increase the amount of waste generated. Sanitation is required when dealing with these situations. To meet the sanitation needs of these [sometimes temporary] situations, portable restrooms were created in the 1940s.

The earliest portable toilets were constructed of wood and metal. And while they technically did their job, they left much to be desired. For one, they were big and they were heavy, which made transporting them a real pain in the behind.

The rise of strong, lightweight plastic polymers benefitted portable toilets, as seen by their popularity today. Harvey Heather is credited with creating the first one-piece fiberglass unit in the late 1970s. This fiberglass Strongbox was just as sturdy as earlier types but was far lighter and easier to transport. It was also easier to clean (a very important aspect of the sanitation industry). The one-piece molded design was made from thick, dark material that didn't let in natural light. They also weren't designed to nest, so transporting them from manufacture to consumer was costly. 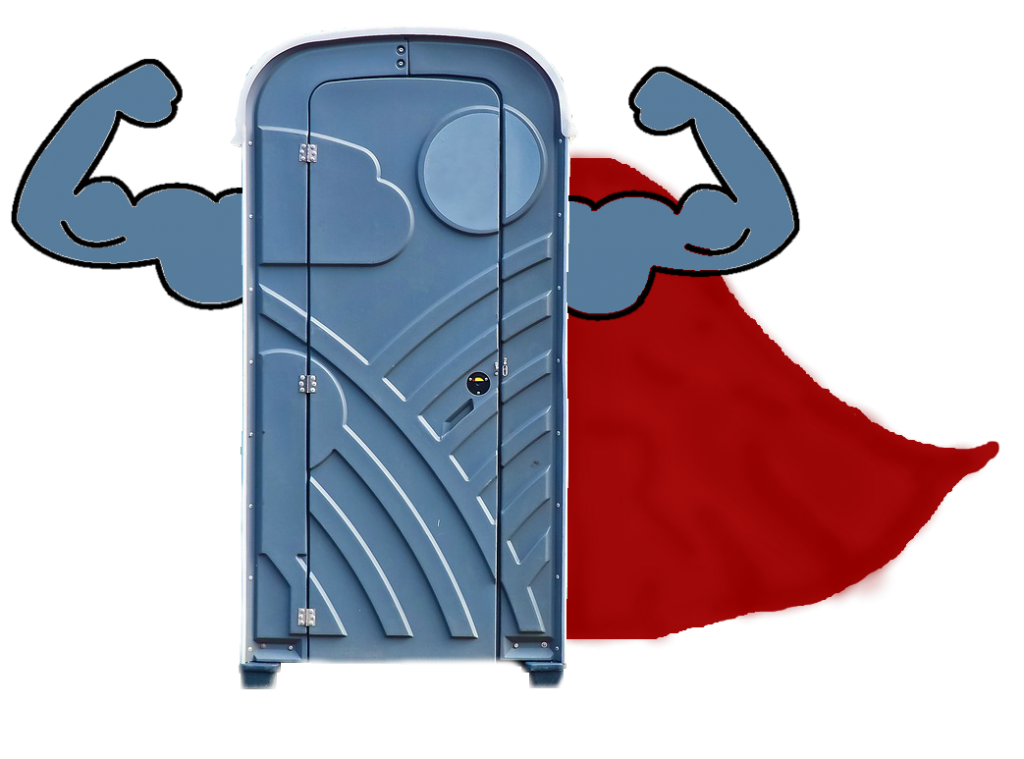 Although they might seem nasty, today's portable toilets are a vast improvement from the porta-potties of old.

Modern porta-potties are constructed from lightweight sheet plastic, such as polyethylene. The signature white translucent roof allows the permeation of natural light so there's no excuse for poor aim. Non-slip floors prevent accidents (you know, in the event of the aforementioned poor aim). Ventilation systems allow us all to breathe a little easier when we enter these boxes. Sometimes basic models also include hand sanitizer and a separate urinal.

No matter your needs, there's a special portable toilet for you!

If you're working a high-rise construction job, there's a special roll around restroom. This miniature porta-potty has wheels and can easily fit into a construction elevator or be hoisted by a crane.

If you're having an upscale event (such as a wedding) in an outdoor location without access to restrooms, have no fear! Luxury restroom trailers exist and come equipped with a number of amenity options, such as air conditioning and running water hookup.

Flushable porta-potties, child-size units, and solar powered restrooms are just a few of many types of portable toilets available.

It's what's inside that counts.

If you break the rules and decide to take a peek for yourself, you should at least know what you're looking at, right? Wrong. That's the whole point.

Inside the holding tank are a number of unpleasant things and things meant to make it seem a bit less unpleasant. The three biggies include blue dye (to hide the appearance of what's inside), fragrance (to mask odor), and biocides (to kill bacteria and microbes). Formaldehyde used to be the standard for killing bacteria in portable toilets, but many states have outlawed its use because wastewater treatment plants cannot properly dispose of the chemical.

In the summer months, operators increase the chemicals to combat the increased bacteria due to heat. Porta-potties at festivals also get this treatment when heavy use is expected. During the winter, a salty brine is added to lower the freezing point on the tank. Blue icicles seem far less pleasant now, don't they? 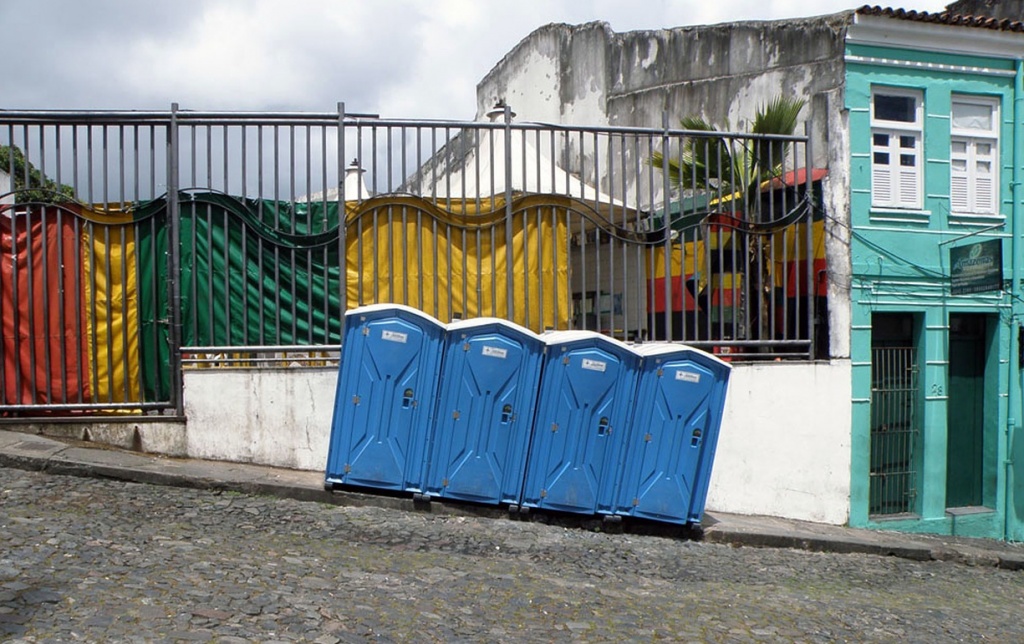 Blue is the New Green

The greener approach to reducing odor-causing bacteria is to instead introduce beneficial enzymes and microbes that feed on the bacteria. Certain biological additives can also increase decomposition of organic matter (including toilet paper) so the porta-potty tanks don't need to be emptied as frequently.

While porta-potties are certainly not our number one choice when it comes to restroom options, these blue-filled tanks are a very green means of human waste disposal. Toilets require water every time someone flushes that handle. Porta-potties, on the other hand, save a lot of water an estimated 45 billion gallons a year, in fact. Now that's not something to make a stink about.