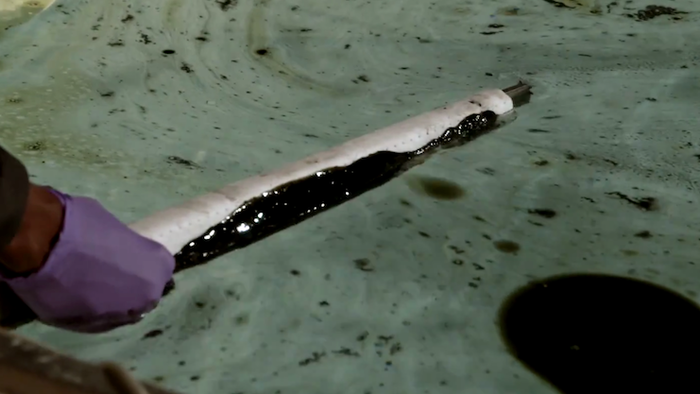 Oil spills are a messy and unavoidable fact of life on Earth. When they happen, particularly in environments containing water, there hasn't been a clear-cut way to effectively and entirely remove oil from the water in a fashion that is fast, easy, inexpensive, and environmentally friendly.

For the past few decades, the typical response to water-based oil spills was the "boom technique." Booms are temporary, floating barriers made of plastic and fabric that work to prevent oil from washing ashore on beaches and swampland. Booms also help concentrate oil into a particular area so that it can be vacuumed from the surface.

Aside from booms, chemical dispersants such as Corexit are added to oil-contaminated water to congeal the oil into large clumps for easier removal. It works, although when Corexit is added to oil, it makes the mixture over 50 times more toxic than just the oil alone, and not all of the compound can be removed from deep waters because of limited technology.

Recently, Arden Warner, a physicist at Fermilab in Batavia, Illinois, discovered a new and surprising way to assist with oil cleanup efforts. Arden's typical day of work involves colliding high speed particles together in an accelerator to understand the smallest forms of matter, however, he managed to come up with a way to organically magnetize oil so that it can be separated from water and magnetically vacuumed up.

How is this done though if oil itself is not magnetic? Believe it or not, Arden's secret comes from magnetite, the world's most magnetic, naturally occurring mineral which is already present in Earth's waters. When minuscule shavings of magnetite are added to oil, the oil is rendered magnetic. This metal is small enough, light enough, and capable of chemically bonding with oil to create a new and possibly superior method to oil cleanups. In a VICE Motherboard video detailing his experiments, which you can view below, Arden claims that his discovery can be utilized across multiple different types of oil. "I've tried over 100 different oils," he said. "I even tried heavy crude and it does work."

"I tried it on bird feathers," he added. "You can remove it from bird feathers and other surfaces using this process." This is critical, as animal rights activists are quick to criticize when oil spills harm wildlife and no methods are available to relieve these animals of oil-soaked fur or feathers.

Although the theory behind magnetizing oil is hardly new, Arden's approach is different in that it provides an all-natural alternative. He states, "I'm not using any absorbents. I'm not using any chemicals. I'm not using anything that saturates. Using magnetite, which is natural to the environment, is what was inspiring to me; using something that has no known adverse effects and is not as bad as dispersants, for example."

Looking to the future, Arden hopes that oil spill cleanup workers will implement a new magnetic boom that he recently patented. What his invention does is create a large enough magnetic field for the magnetite-infused oil to be guided toward so that it can be collected, separated, and reused. Arden's boom, with a Teflon exterior, guides the oil along an axis at an increasing magnetic pull until it is brought to a conveyor belt system that is also magnetized. The belt pulls oil out of the water and into a container with a highly magnetic bottom. Magnetite naturally goes for the strongest magnetic force and will stick to the bottom of such a container, while oil and remaining water separate. This allows for the magnetite to be reused, the oil to be removed, and the water to be returned to its source.

With the help of progressive-minded experts like Arden, the oil industry can be better prepared for any oil spill challenges that may occur in the future. Watch the full video below and be sure to comment with your thoughts.