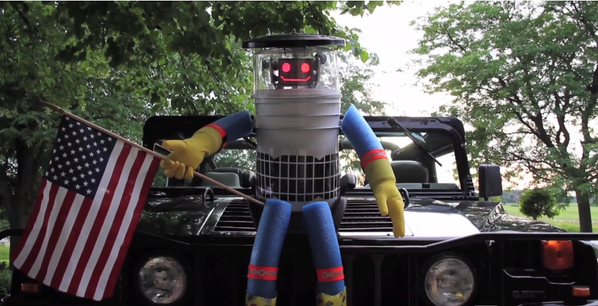 Two weeks ago today, Industrial Outpost posted a story about a hitchBOT, a small robot that's the product of a social experiment by two Canadian researchers to get it from Boston to San Francisco with only the help of friendly passerby. In the time since our initial post, hitchBOT has travelled from Boston down the east coast to New York, and from there to Philadelphia.

However, the City of Brotherly Love does not have love for robots.

HitchBOT was last seen in working condition on August 1, but by the following morning, he was no more. "Unfortunately, hitchBOT was vandalized overnight in Philadelphia; sometimes bad things happen to good robots," said the hitchBOT team in a statement on their website. Also stated is that there will be no attempt to pursue or press charges against those who damaged hitchBOT. "We know that many of hitchBOT's fans will be disappointed, but we want them to be assured that this great experiment is not over. For now we will focus on the question 'what can be learned from this?' and explore future adventures for robots and humans," they said.

The researchers plan to retry the experiment in 2016, with Philadelphia as the new starting point.