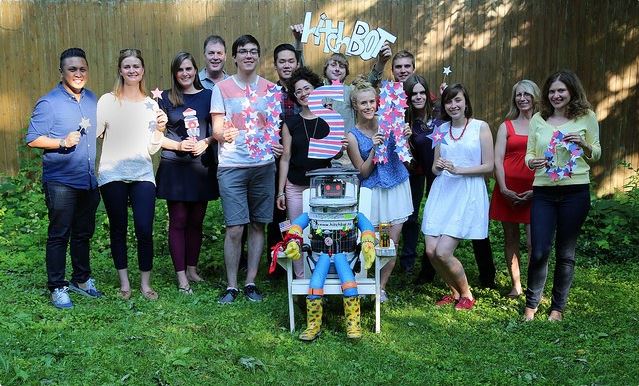 Meet hitchBOT, the hitchhiking robot that's been traveling the world with the help of friendly strangers. It's been to Europe and Canada so far, where it went to a wedding, spent a week with a heavy metal band, and visited a Native American —Reservation. But now, hitchBOT has come to the USA.

Just recently, on July 17, marked the beginning of a cross-country journey designed by two Canadian researchers, Frauke Zeller and David Harris Smith. The purpose? Get hitchBOT from Boston to San Francisco with only the help of those who want to pick up a talking (not walking, otherwise what's the point?) hitchhiking robot. The hitchBOT also has a list of things it wants to accomplish on the way, including a visit to Times Square, tanning on Myrtle Beach, visiting a jazz club in New Orleans, seeing the geysers at Yellowstone, and doing "the wave" at a sports game. The robot stands about three and a half feet tall and is made from a variety of items. Its body is a plastic beer pail, its arms and legs are made from pool noodles, and it wears rubber gloves and boots. The hitchBOT's face is an LED with a permanent grin behind a clear, plastic facemask. Built in is a GPS tracker and internal camera, so hitchBOT can update its journey along the way via social media. For power, it has a packed-in chord that simply needs to be plugged into an electrical socket to charge its battery.

"We want to see what people do with this kind of technology when we leave it up to them, " said Zeller in an ABC News article. It's an art project in the wild — it invites people to participate. "

So far, hitchBOT has been to the Peabody Essex Museum and the historic Hawthorne Hotel in Salem, as well as on a boat off the coast of Gloucester. At the time of this writing, hitchBOT's last update was a photograph from inside the Gloucester house he's been staying at.