Where else can you find a Dire Wolf outside of Westeros? California, of course.

If you ever find yourself cruising around Hancock Park in Los Angeles, California, you might find yourself very close to some fascinating history.

Within the Miracle Mile District of urban LA are about 100 pits of bubbling, black, viscous pitch. These tar pits, known as the La Brea Tar Pits, have become the most famous Ice Age excavation site in the world.

Let's get this out on the table early on: while they are called tar pits, a more accurate description would actually be asphalt or bitumen pit. —Tar " is a by-product of the distillation of woody materials. These pits (or lakes), on the other hand, are the result of petroleum seepage leaking to the surface (crude oil). These areas were then excavated by humans.

But before we get too far ahead of ourselves here, it's certainly worth a trip in the time machine to prehistoric LA. 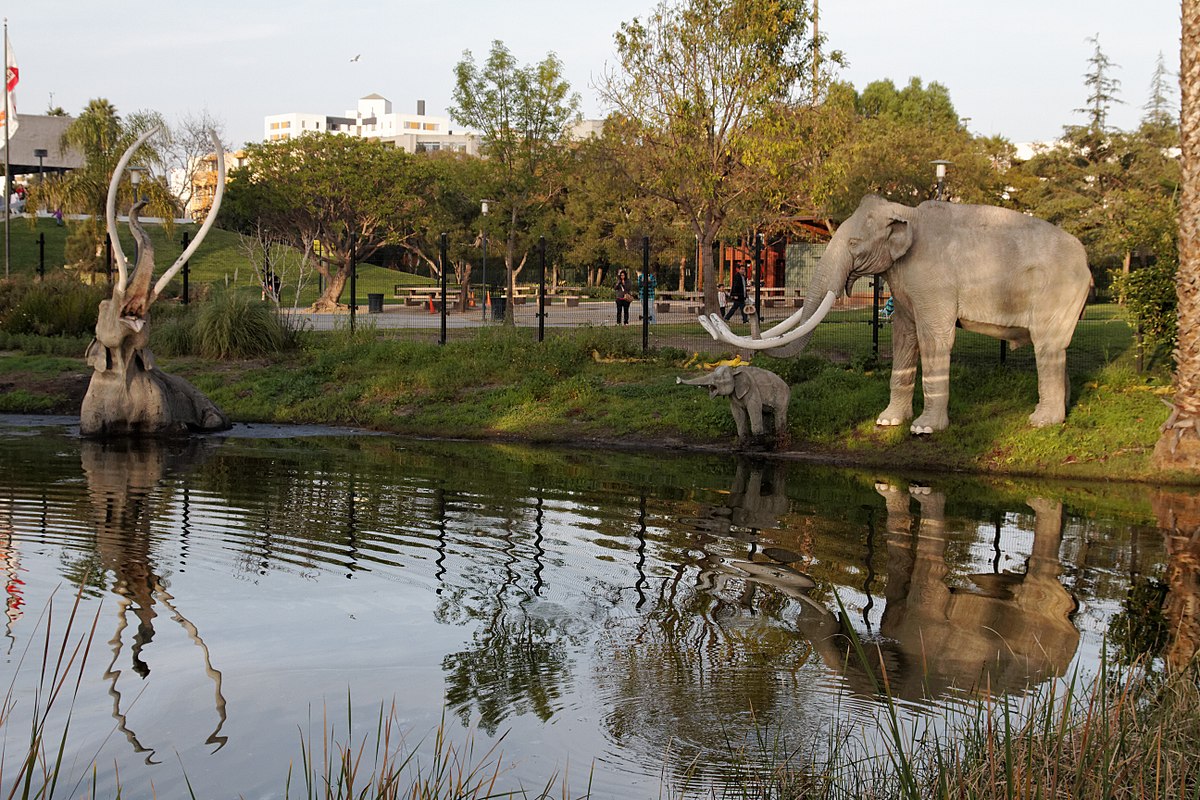 Long before celebrities and movie stars graced the streets of LA, mastodons, saber-toothed cats, dire wolves, and ground sloths had that honor. Until 11,000 years ago during the Pleistocene Epoch (or Ice Age), the area was teeming with wildlife. Eventually, the large and exotic mammals all died off. Extinct as we know them today.

But some of them didn't ever leave LA. Those that (unwillingly) stayed behind have earned a particular A-list status of their own, due to their demise in the tar pits.

Where did the tar pits come from?

Millions of year ago, present-day LA was submerged underwater and teeming with life. Dead marine life, plant matter, and sediments accumulated on the ocean floor. Eventually, the pressure turned the organic material remains into petroleum, AKA fossil fuels (get it?). Beginning around 40,000 years ago, the water receded into glaciers up north. What was once the ocean floor, became dry land. As a result, the petroleum started seeping its way to the surface through fissures in the Earth's crust.

The petroleum substance in the tar pits (asphalt or bitumen) is what remains after the lighter components evaporate away. This asphalt is incredibly sticky, especially in warm weather, and is also incredibly adhesive.

This adhesive power could trap even the largest mammals. In fact, 90% of the fossilized remains found in the tar pits are those of meat-eating predators. Paleontologists believe that prey animals would become trapped in the sticky pits and would draw large numbers of predators to the site. When the animals went after the prey, they, too, would become ensnared. 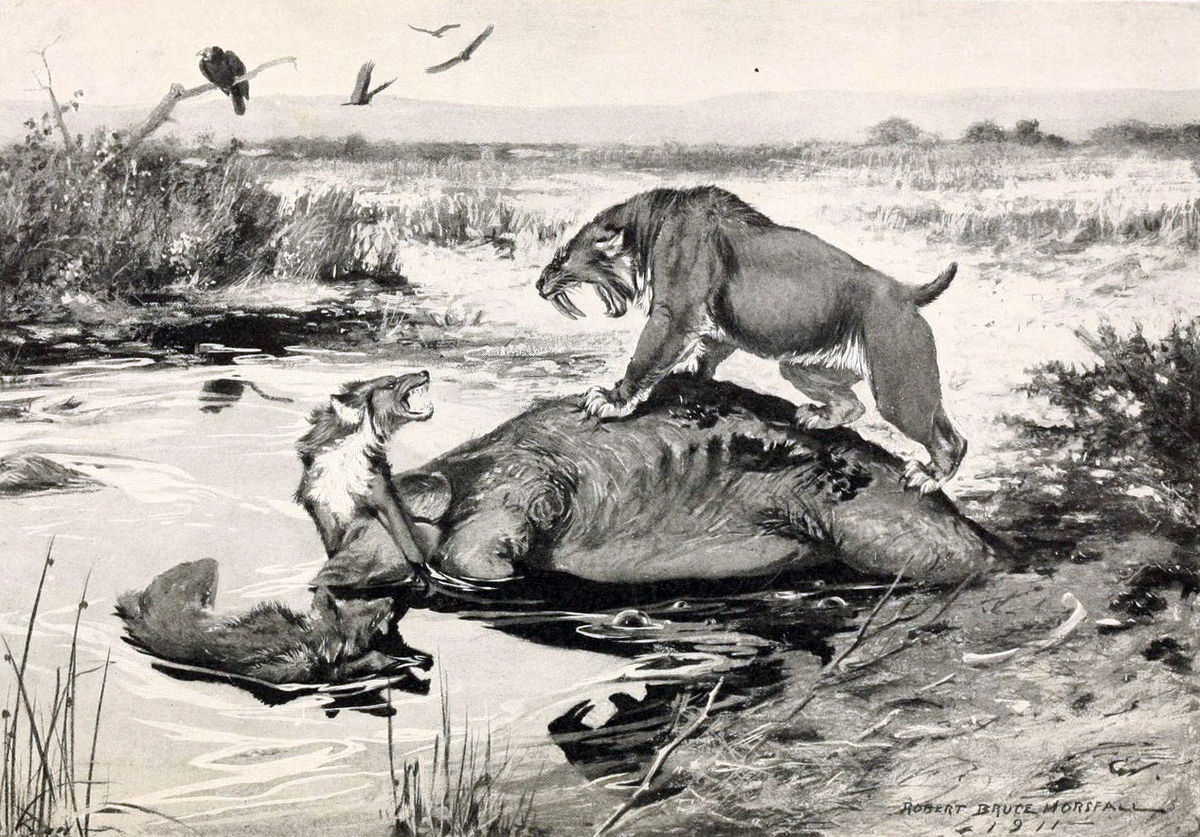 The Native American Chumash and Tongva people lived in the area and used the natural asphalt pits as glue, waterproofing for baskets, and as a caulk for their plank canoes. By the mid-1700s, Spanish explorers encountered the pits and made the first written record of them in 1769.

In 1781, a group of Spanish settlers founded the area that would become present-day Los Angeles. They founded the pueblo, El Pueblo de Nuestra Señora la Reina de los Ángeles de Porciúncula, which translates as "The Town of Our Lady the Queen of the Angels of Porciúncula." The settlers and citizens of the area also utilized the asphalt from local seeps to waterproof roofs and as a fuel.

It wasn't until 1901 when Union Oil geologist W. W. Orcutt found the first fossilized prehistoric animal bones in the La Brea Tar Pits. Contemporary excavation began a little over a decade later between 1913 and 1915. The National History Museum of Los Angeles County uncovered a vast number of specimens during this time that constitutes a large portion of the collection today.

Excavators dug 96 pits during the course of these early excavations and researchers found some of the most captivating specimens in Pits 3, 4, 9, 61, and 67. However, Pit 91 was the most famous and most dissected.

For nearly 4 decades, it was the only pit actively excavated at La Brea. Pit 91 was home to the remains of everything from plants, insects, and small birds to the ghosts of dire wolves, western horses, and mammoths. And here's the kicker— the pit is only 15 feet deep.

In 2006, the Los Angeles County Museum of Art started a project to construct a new parking garage adjacent to the tar pits. Given the area's historical significance, a salvage archaeologist excavated the area— and uncovered 16 deposits containing artifacts.

Rather than delaying construction, 23 crates containing the excavated deposits were taken to the museum's main research facility intact. Through glass walls, the public can actually watch researchers sift through the remains. So far, scientists have only managed to fully examine several boxes of earth and tar. It will take several years to complete all 23 crates.

One of the most important finds from Project 23 (so far) is the discovery of an 80% complete Columbian mammoth with tusks. His name is Zed and he is the largest mammal ever found in the area. 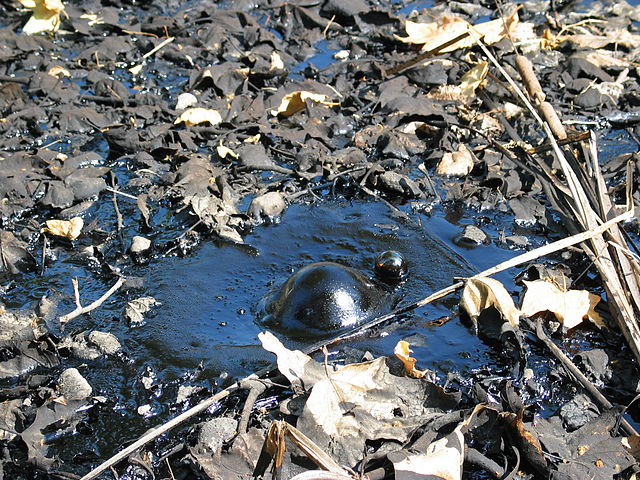 The La Brea Tar Pits in California are not the only natural asphalt lakes, although they are certainly the most famous.

While a majority of the asphalt used worldwide comes from industrial petroleum, natural sources do contribute to the overall supply. It's estimated that 70 percent of all asphalt is used in road construction. Pitch Lake in Trinidad contributes tens of thousands of tons of pitch per year. Pitch Lake's total asphalt reserves are estimated at around 6 million tons. The reserves are steadily replenished from oil below ground.

In 2007, researchers from UC Riverside discovered that living bacterium releases the methane when breaking down petroleum deposits. Environmental scientists hope this new bacteria and their enzymes can be used for several purposes, including bioremediation (cleaning oil spills), alternative energy (biofuels), enhanced oil recovery, and industrial applications (biochemicals and biotechnology).