"Color my life with the chaos of trouble."

Or, you know, paint works, too.

Humans have been making art for a really long time and that's no exaggeration. Actually, if you tried to guess the oldest known creation of human artwork, you'd probably fall short a few thousand years (or more). Artwork found in an Indonesian cave can be dated back at least 40,000 years, which is so far the oldest known painting. That's way older than written language, in case you didn't know.

If this proto-graffiti can tell us anything, it's that even early humans had a sense of self, a sense of their existence in the world, and the desire to leave a mark on the world denoting their presence. Other cave paintings nearly that old exist all around the globe, as well, depicting various animals, abstract designs, and crude human forms.

Today, individuals make art for any number of reasons, although we often view this as a form of expression. Making art is a very human thing because art is culture and culture is people. Artists continue to make art out of a number of supplies, including sculpture and "found" art, but paints have remained a fairly constant medium throughout the years. 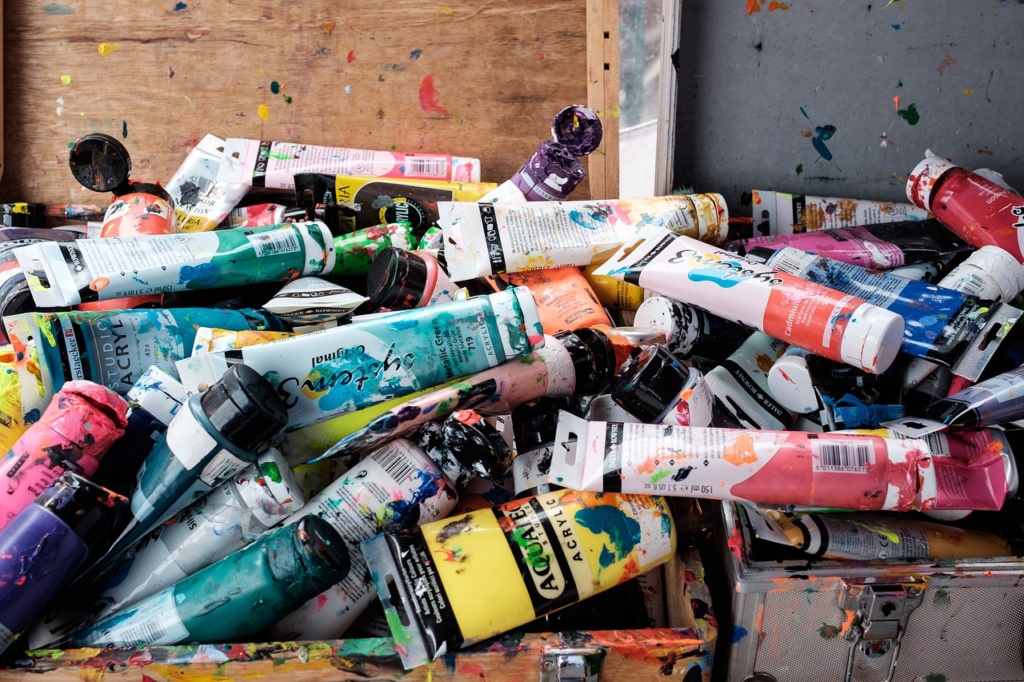 "Painting" itself refers to the process of applying paint, pigment, color, or another medium to a surface. So yes, you can technically "paint" without "paint."

Paints themselves vary greatly and include a number of different types and compositions (both of which are affected by history and technology). Early man-made paints, for example, include red and yellow ochres used as early as 100,000 years ago, potentially made with animal fat binders.

Walk into your average art supply store and you're unlikely to find any red ochre and seal fat paints. However, you will likely find oils, watercolors, acrylics, etc.

Oil painting is a very traditional medium with evidence of early paintings dating as far back as 650 AD. These paints, which are made with pigment particles suspended in a drying oil, are very popular with beginner painters because they are slow drying and are more mistake-friendly. Watercolor painting is an extremely old process that uses paints made of pigments suspended in a water-based solution. Acrylic paints are made of pigment suspended in acrylic polymer emulsion. These are commonly used in art classes and crafting because they don't require any chemicals and are easy to clean up: they rinse away with just water.

Acrylic paints made from acrylic plastic resins are incredibly fast-drying, especially compared to oil paints. They are also a much younger type of paint compared to both oil and watercolor. 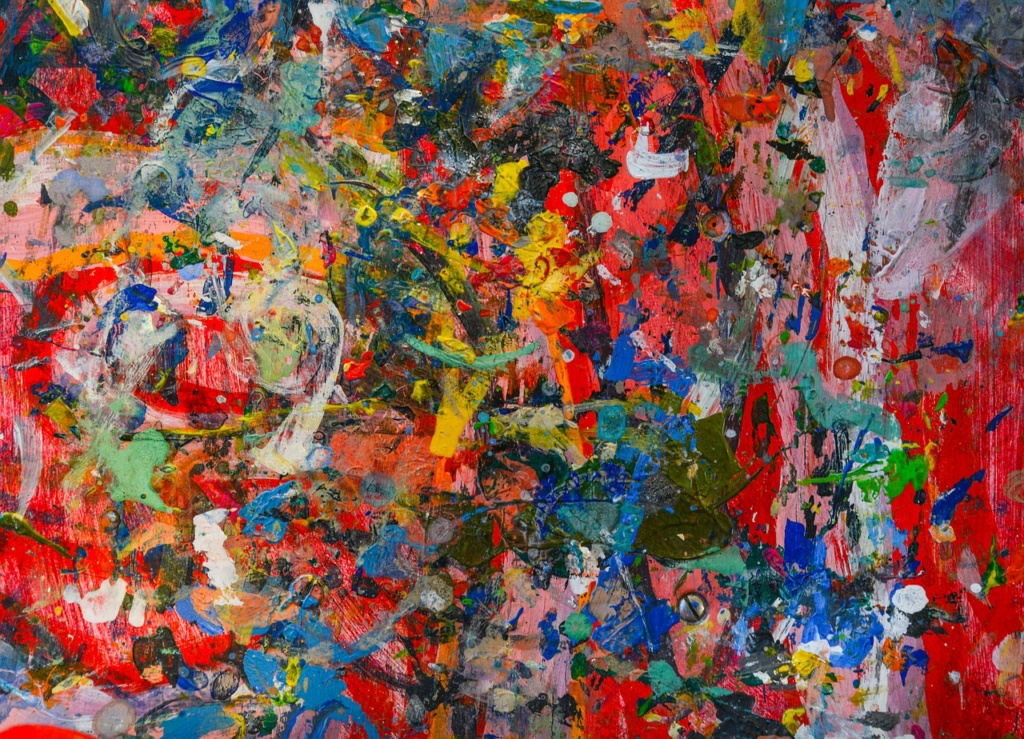 Acrylic paints and paintings didn't make their artistic debut until the twentieth century. What made these paints possible was the synthesis of acrylic compounds in the mid-19th century. However, people didn't realize their potential until 1901 when Otto Röhm, a German chemist, published his dissertation on the polymerization products of acrylic acid. In 1915, Röhm obtained a German patent for polyacrylic ester as a paint binder for use in drying oils in industrial paints and lacquers. Early acrylic resins were primarily made for industrial use.

By the 1940s, Leonard Bocour and Sam Golden sold early versions of acrylic paints under the name Magna. Unlike modern acrylic paints, these were mineral spirit-based paints rather than water-based. In the 50s, Otto Röhm and his business partner Otto Haas created the first acrylic emulsion specifically for paint. Five years later, water-based acrylic paints were commercially available.

Acrylic paints became popular among artists who were exploring movements and forms and those who wanted to avoid oil paint's considerable drying time. These synthetic paints were very versatile and clearly had a lot of potential especially when manufacturers began improving their methods and created artistic acrylic paints with richer pigments.

Acrylic paints have the benefit of a wide-range of effects and can emulate both the soft effects of watercolor and the sharp effects of oil paint when either watered down or modified with acrylic gels, media, or pastes. Andy Warhol used acrylic paint and his famous Campbell Soup Can " work highlights the potential of sharp, bold clarity with this synthetic paint. 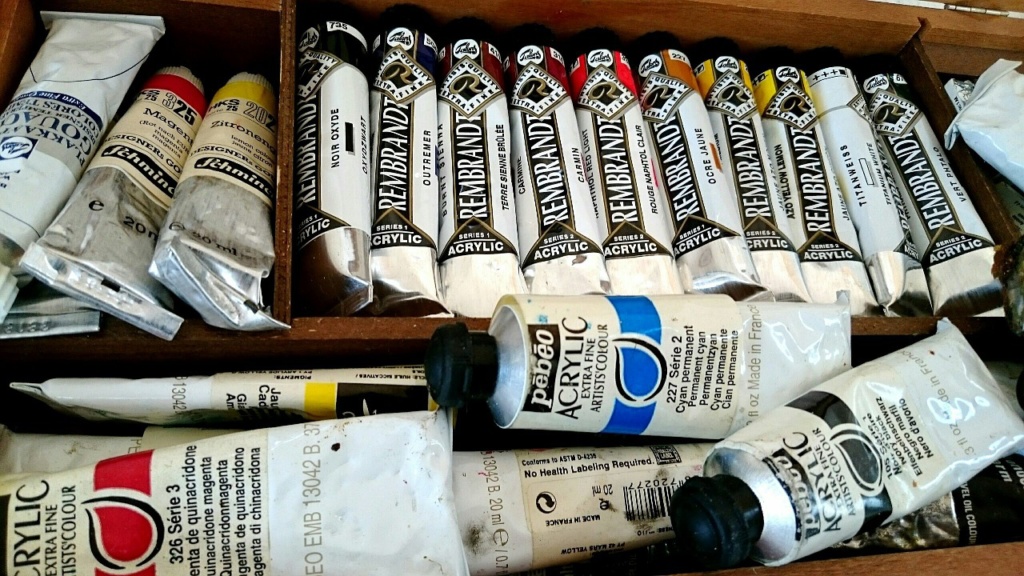 Paint: Not So Different from Lubricants

Commercial acrylic paints are available in two grades: artist acrylics and student acrylics. The former "professional" paints have more pigment and are specially designed to resist chemical reactions from exposure to water, ultraviolet light, and oxygen. Student acrylics are similar but have less pigmentation, have fewer color options, and are cheaper.

There are also a number of varieties when it comes to acrylic paint, including heavy body, medium viscosity, open acrylics, acrylic gouache, craft acrylics, and exterior acrylics, among others.

Every paint is going to differ because every manufacturer makes their paints differently.

At its most basic composition, acrylic paints are pigment plus a synthetic binder to hold the pigments together and give the paint its gelatinous consistency. Within this binder, though, the specific ingredients vary. Pigments can come from nature but most acrylic pigments are manmade (synthetic).

Like lubricants, paints can contain a number of different additives to give them particular properties. These can include surfactants which, if you're familiar with lubricant additives, are anti-foaming agents. They both stop the paint from frothing and disperse pigments. Cheaper paints may also contain a number of additional additives that cost less than pigments, such as filler, opacifiers, or dyes.

The Art of Oil: Turning Petroleum into a New Medium

Plastics Before Synthetics and the Transformation of the Visual Arts