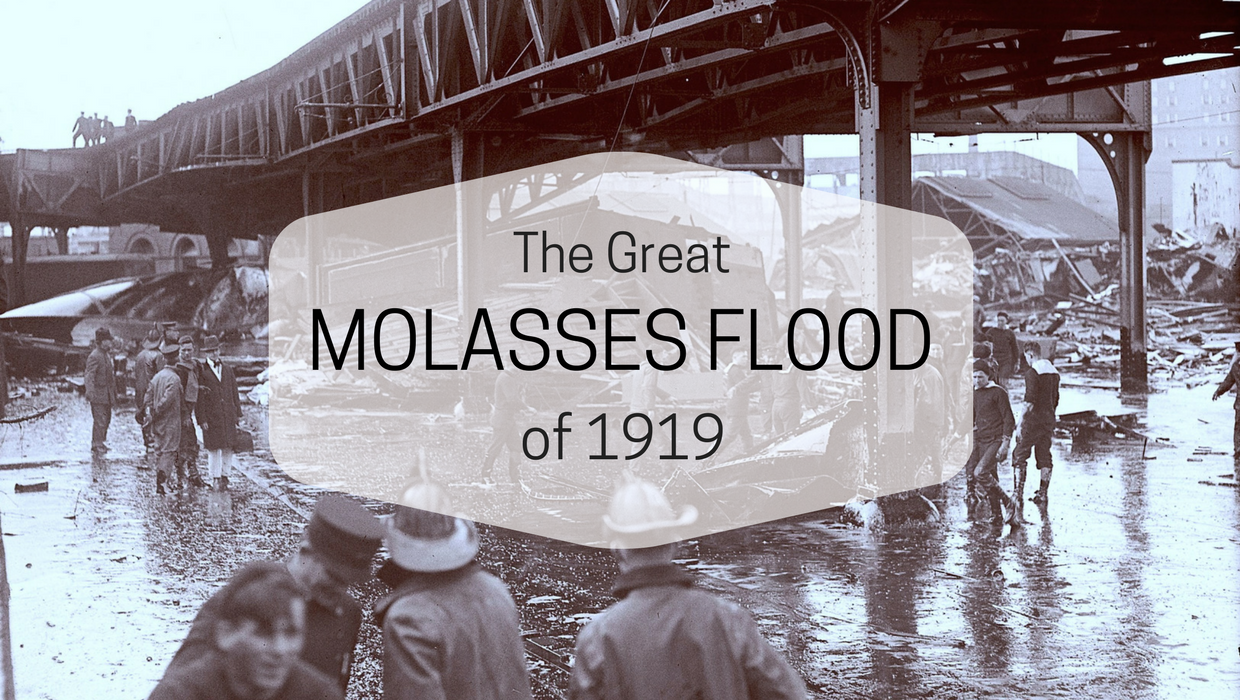 If you've ever encountered molasses (it makes tasty gingersnaps and makes brown sugar, well, brown sugar), you know it's some thick, sticky stuff. It's viscous and it's slow to pour. So, if you're trying to imagine how molasses could flood a city in the winter, it can be a tough sell, especially without looking at the pictures. But it did happen, and now, nearly 100 years later, scientists are figuring out why and how.

January 15, 1919, was unusually warm in the city of Boston, Massachusetts. A little after noon, nearby individuals (soon-to-be witnesses) heard shots like gunfire and an awful grating sound. Merely moments later, a giant wave of syrup— reportedly 25 feet tall— rushed down Commercial Street, destroying buildings, overturning vehicles, and even pushing the Engine 31 firehouse off its foundation. By the time it reached an elevated railway on Atlantic Avenue, it nearly lifted a train off its tracks. Yes, it was really that powerful. Upon its initial surge, the molasses traveled at a whopping 35 mph— not too shabby for a viscous sweetener.

Initially, people assumed that there had to have been an explosion that caused the molasses to move so quickly, but that wasn't the case. The storage tank had simply burst and the molasses did what molasses apparently does when exposed to those particular conditions: it moved at a destructive pace.

The day after the flood, on January 16, 1919, the New York Times briefly reported on the incident. The report references how the storage tank's wall —broke into two great segments of sheet iron that were pulled in opposite directions. "

Why did the Boston Molasses Flood happen?

The massive storage tank in question belonged to Purity Distilling Company, a chemical firm that specialized in producing ethanol through distillation. The huge steel tank (50 feet tall, 240 feet around) could store up to 2.3 million gallons of molasses. When fermented, molasses can produce rum and ethanol, the active ingredient in alcoholic beverages and a key component in the manufacturing of munitions. The facility had been built in a rush as World War I raged and the need for munitions was high.

In 2015, a study revealed the cause of the collapse was due to several design flaws. For one, the steel was too thin to withstand the stress of that much molasses. The steel was both too weak (about 50% too thin) and too brittle (due to too low levels of manganese), therefore more likely to crack. The structure collapsed so completely it nearly disintegrated. 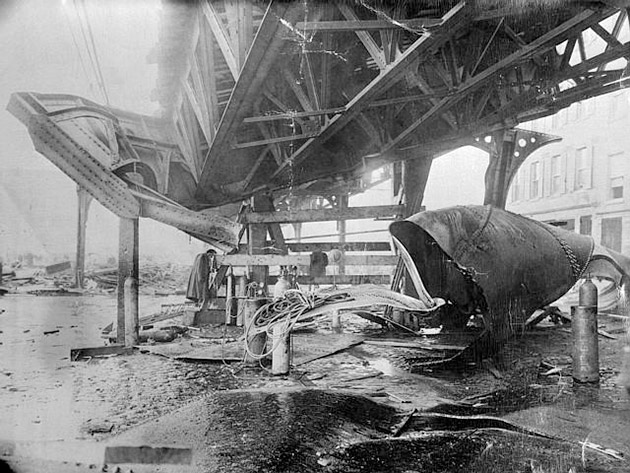 Apparently, this disaster wasn't the first time the tank in question showed signs of a problem; however, it was certainly the last. Stephen Puleo, author of Dark Tide: The Great Boston Molasses Flood of 1919, states that the tank was rushed to completion and wasn't inspected. Supposedly, it always showed signs of disrepair and was leaking from the get-go. The steel went from being blue to painted a brownish-red, likely to mask the leaks.

Like a band-aid on a bullet wound, it didn't work. Obviously.

So now that we know the probability of why the flood happened, you might begin wondering how such a rupture could cause so much damage, literally crushing people and entire buildings alike.

In fact, people have been wondering this very same thing for years.

How did it cause so much damage?

In November 2016 at a meeting of the American Physical Society, a group of scientists and students presented information that might be key to understanding how this tragedy became so tragic. 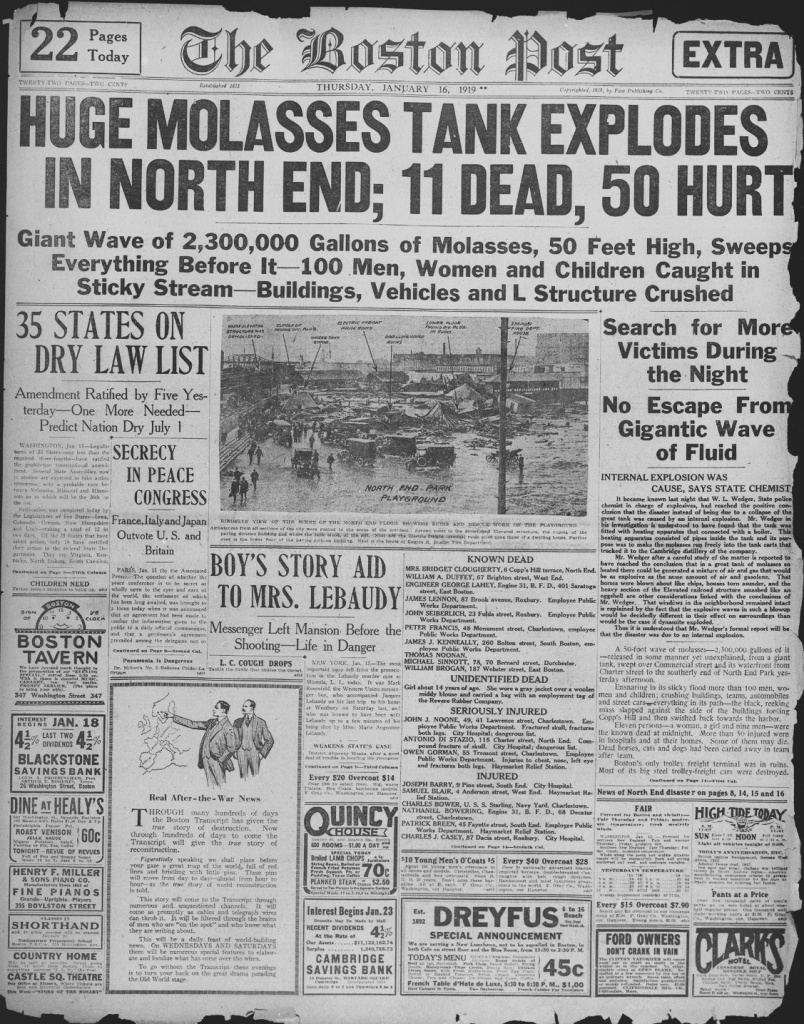 Temperature can also be a contributing factor to viscosity. If you're familiar with lubricants, you might know that automotive or industrial oils can behave differently under different temperature conditions. Winter, in particular, can cause your automotive engine oils and greases to congeal.

Let's apply this principle to molasses— specifically, 2.3 million gallons of it.

January is a cold month, particularly in the New England area. So we have a highly viscous substance in January. If you asked my high school history teacher, he'd probably say it wouldn't go anywhere— his favorite expression was slow as —molasses in January. But if good old Mr. M was right, and molasses in January is so slow, how did this flood kill 21 people and manage to injure more than a hundred more? How did it move at 35 miles per hour?

To figure this out, researchers needed to look at the entire picture: not just the subpar steel tank, nor just the viscosity, nor the temperature alone.

How did all these varying factors combine into such a sticky tragedy?

In 2016, these researchers concluded that the newly-arrived molasses (fresh from the warm Caribbean) plus the cold, Massachusetts air made for a terrible, terrible recipe.

When the molasses arrived in Boston harbor, it was heated a few degrees. This warmer temperature meant it wasn't nearly as viscous as it could be in Boston January temperatures. Two days later, when the incident occurred, the molasses still could have been up to 10 degrees Fahrenheit warmer than the surrounding air.

The molasses was likely warm enough to flow more freely— and quickly. However, it was still cold, so it flowed thick. The cold air temperatures likely raised the viscosity of the molasses. And because it was so thick, people became trapped by the sticky syrup. That's actually how most people died. People became stuck and ended up suffocating, not unlike the prehistoric animals who died in the La Brea Tar Pits.

All it took for the tragic —Boston Molasses Flood to happen was shoddy steelwork and fluid dynamics.

Buy Early & Save Big: Power Service Rebate is HERE It's that
monthly newsletter