About two weeks after we sprung our clocks ahead for an extra hour of daylight we celebrate Earth Hour. " On March 25 this year the world joins together for one hour of lights out.

This has all got me thinking about electricity and light bulbs, and then a light bulb went off. We've talked about candles, Christmas lights, and even Greek Fire (fire=light, so this counts here.), so it's about time we talk about light bulbs. 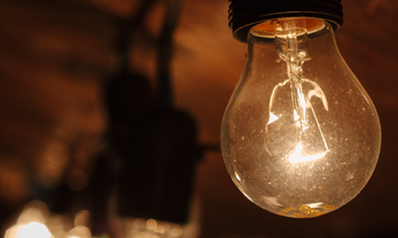 In 2006, Australia developed and named the idea. It has taken off since then with more than 7,000 cities participating today. The idea started in 2004 when Australia's World Wide Fund for Nature met with an advertising agency to develop ideas for encouraging Australians to address climate change.

The idea was originally called The Big Flick " with the idea that a large number of people would flick off the lights at the same time. The first major event took place in 2007, inspiring San Francisco to hold their own later that year.

San Francisco became the second major city to hold a Lights Out " event in October of 2007. The following year, more countries joined and major cities turned the lights out on major landmarks, such as the Colosseum in Rome, the Sky Tower in New Zealand, Big Ben in London, the Eiffel Tower in Paris, and even Times Square in NYC. The event is now organized by the World Wide Fund for Nature (WWF). You can participate this year by turning your lights off between 8:30 and 9:30 p.m. on March 25, giving those hard-working light bulbs a break for a bit.

Once Thomas Edison invented the first practical light bulb, things really took off. Today, the bulbs we use closely resemble the design Edison created, but the means of light and parts of the bulb have changed and improved a great deal.

Originally, Edison used carbonized cotton thread as a filament and today we use tungsten filaments. Also, bulbs were all made by hand in the early days, but the process is nearly 100% automated today.

This is where petroleum comes in! As I've stated, the production of light bulbs is almost completely animated, and those machines need proper lubrication to ensure they're running to their fullest potential. So technically light bulbs aren't made from petroleum, but today they certainly couldn't be made without it:

Just look at all those machines! Petroleum-based lubricants of different viscosities and pour points are used on each machine in the assembly line here to keep the lightbulb manufacturing running smoothly. Different viscosities and pour points provide different levels of lubrication and resistance to heat so that light bulbs can be properly produced and tested so you can light up your life.

It isn't always in the form that you might suspect, but petroleum is here in one way or another producing the things we use every single day.

If you're interested in energy consumption (and bright ideas) check out our post on the consequences of energy poverty.