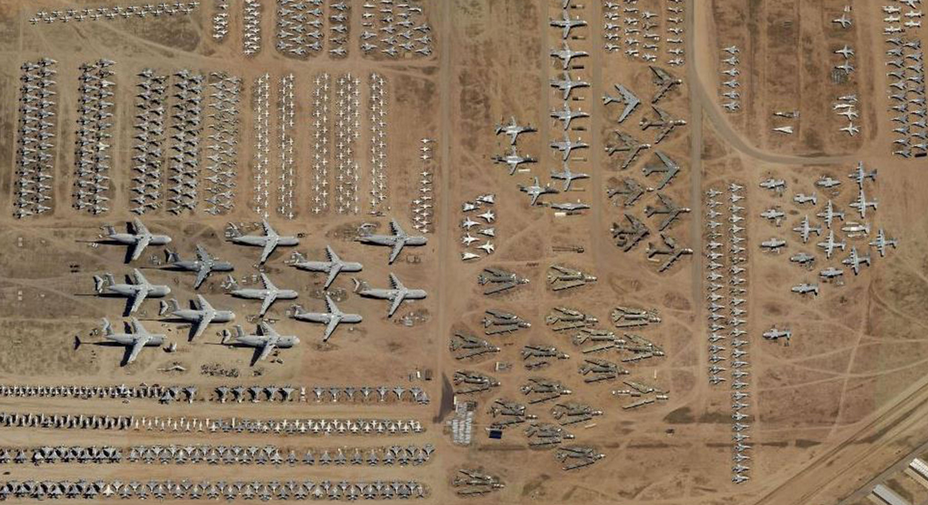 Stretching 2,600 acres across the Arizona desert outside of Tucson is the world's largest aircraft cemetery.

The site is home to multiple generations of military aircraft, huge cargo lifters, bombers, A 10 Thunderbolts, Hercules freighters, and F-14 Tomcat fighters. Rows upon rows of them are arranged to form what has been dubbed "The Boneyard" (check out our post about the Boeing 747 Burning Man art car here for another story mentioning this locale).

Now, courtesy of Microsoft's Bing, you can view this aircraft graveyard using satellite imagery that presents the location in surprising detail. The base, home to the 309th Aerospace Maintenance and Regeneration Group (309 AMARG), carries out repairs on-site to get some of the aircraft flying again, in addition to scrapping for spare parts to use at Davis-Monthan Air Force Base. The location has been an area of interest to Google Earth users since the software launched in 2005, but this is the first time that high-quality images have been available.

Some of the planes located at The Boneyard are merely being stored in between deployments, however, over 80% of the 4,200 aircraft there are in their final resting place. —It is estimated that all of the planes together are valued at around $35 billion. In 2005 alone, staff at the facility recycled more than 19,000 parts worth $568 million.

Check out some images of The Boneyard below, and if you're curious what it looks like from a satellite's point-of-view, turn your browser to your favorite map utility and look just southeast of Tucson, AZ.