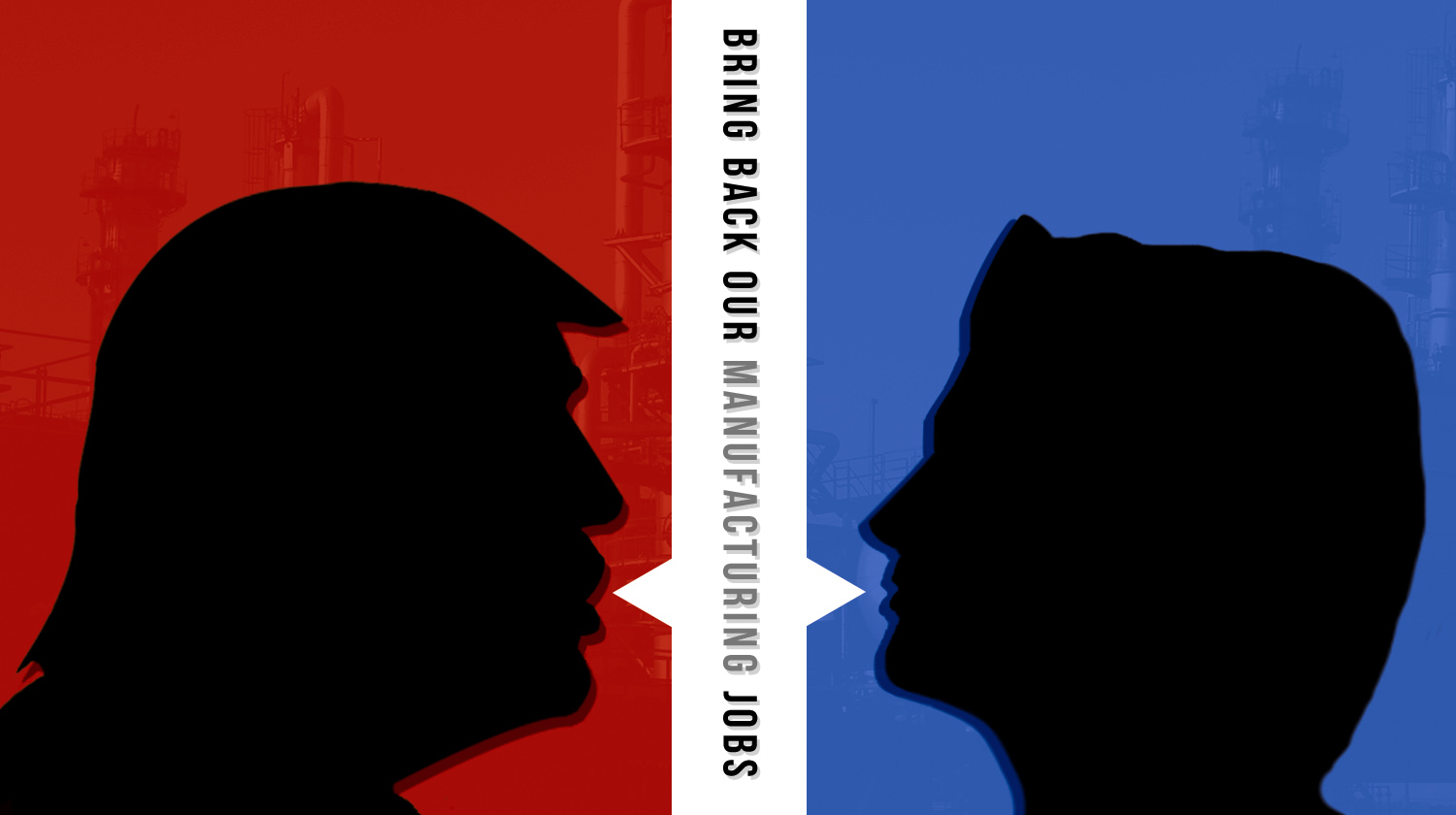 Little over a week ago, most American eyes and ears were busy scrutinizing the back-and-forth exchange of generalities and unused campaign slogans between the country's foremostpresidential hopefuls.

Amid the low-blows and a —barrage of personal attacks, both Donald J. Trump and Hillary R. Clinton — in classic fashion — found virtually every political issue that was discussed to be one worthy of disagreement; yet, the two managed to find some common ground when it came to the US manufacturing sector. 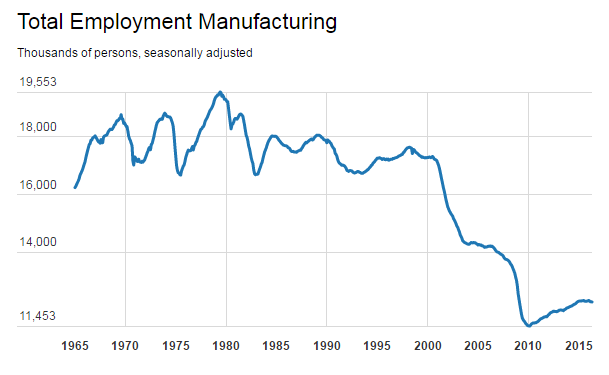 Manufacturing jobs are on the "rebound" -- will they hold?

Ever since the recession came to an end in June of 2009, manufacturing jobs in the United States have experienced a subtle —rebound " — in the past year, however, it seems that the progress has all but come to an end (albeit sluggishly). Fortunately, many of those Americans who have earned their newly appointed industrial jobs have managed to hold onto them; over the past year, the growth of —manufacturing jobs seems to have evened out but, thankfully, they aren't declining.

Yet, for both candidates, this is (as expected) not quite ideal — at least in the American sense of the word.

Manufacturing —workers in the US are receiving —more attention than usual from —both sides — this is especially noteworthy when —considering the fact that the white working class has been deemed —the backbone of Donald Trump's support. " Whichever way the election turns out, industrial workers are banking on some significant changes in the US manufacturing sector. 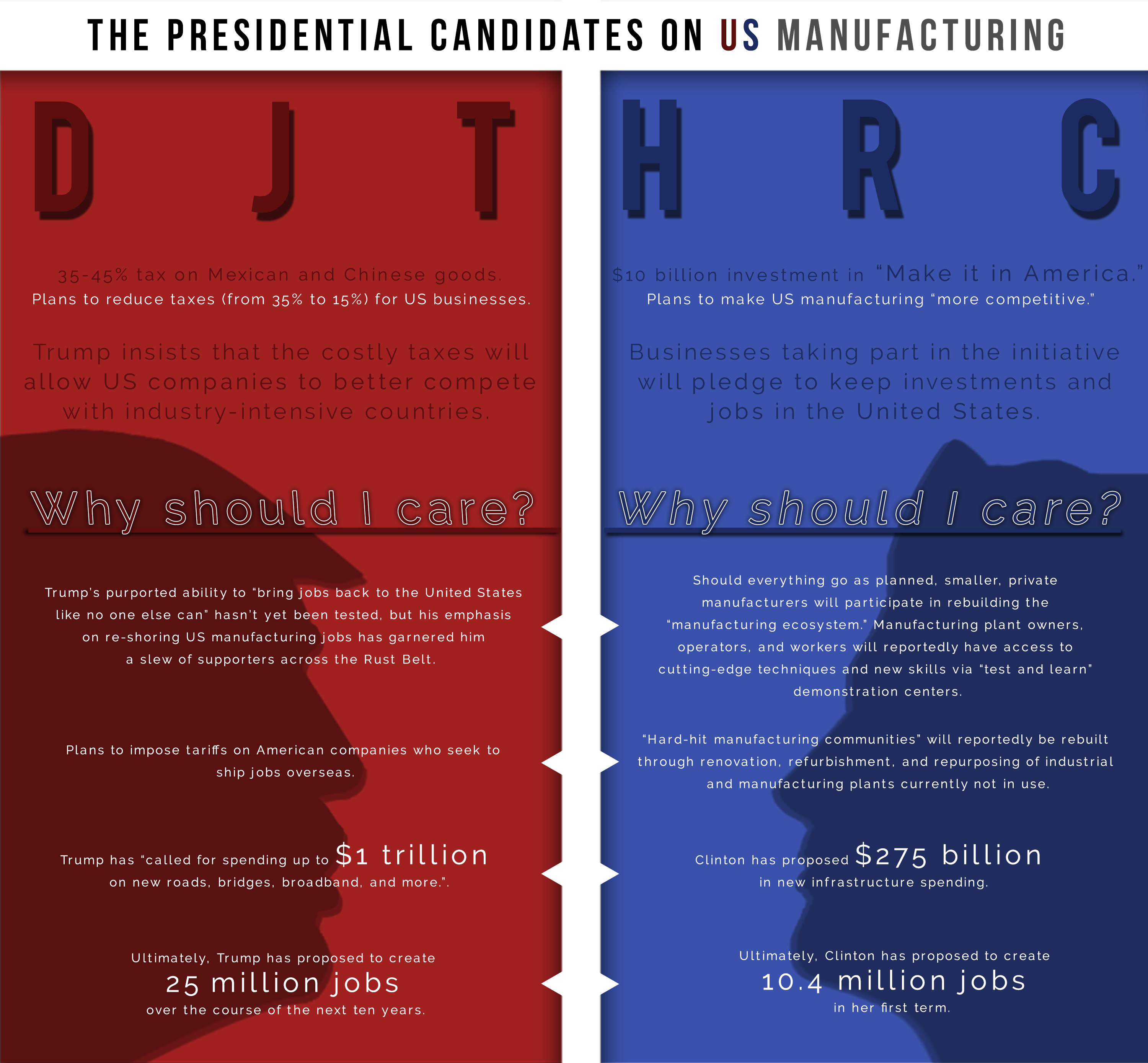 Experts anticipate that an increased emphasis on US investments in infrastructure may contribute to pay increases and job opportunities for construction workers and consequently most of the less educated workers across other industries. " As such, no matter which candidate will be sworn into office as the 45th President of the United States early next year, industrial workers on either side of the debate might find something to be hopeful about.

The looming question seems to be: "at what cost?"

—Just about any way you slice it, Republican Donald Trump and Democrat Hillary Clinton would add to the U.S. debt if either of their tax and spending programs were enacted by Congress next year. " — Eric Pianin, thefiscaltimes.com

Trump and Clinton have made similar statements regarding what they intend to do for industrial and manufacturing workers — especially throughout the states of Ohio, Michigan, and Pennsylvania. In addition to being —among the most important swing states in this election, " the three states have endured the losses of several millions of jobs, most coming in the industrial and manufacturing industry — —naturally, both —candidates have claimed that they will be the one to —bring back our jobs.

So, how likely is this all-but-guaranteed —industrial —renaissance?

Realistically, can we expect to pluck up foreign factories and move them back to the United States? Can we reinvigorate the now-ancient technology and infrastructure of 60s-era American factories? Though the ambitions are high, some experts are skeptical in regards to the candidates' optimism:


—[Manufacturing jobs] won't come back because the world has changed. Manufacturing jobs were about 40% of U.S. employment in 1940; today they're less than 10%, but we manufacture far more now. It's the same worldwide — in the U.K., Germany, Australia, Brazil, India, China, and many other countries, the manufacturing share of employment is falling. Everybody's making more stuff with fewer people, and the trend isn't going to reverse. Suggesting that it will is inexcusable. "

...by and large, the manufacturing sector has only grown more skilled through the cutbacks of the last decade; the positions America has lost were positions it outgrew. A presidential candidate who promises to claw back the careers of 1979 is probably making a promise they can't keep. They would do better to find jobs that fit this decade's economy instead. "

The chief reason the U.S. manufacturing sector is so much smaller is improved technology and automation that's made current workers more productive than ever. What's more, companies continue to find new ways to enhance production and keep down the number of manhours required to produce a roll of steel, a new car or an oil-drilling platform. "

While experts spend a lot of time discussing why the plans of both Clinton and Trump may fail to reinvigorate the manufacturing industry, both of the candidates increasingly spend more time discussing how they plan to succeed — not only because working-class voters are of the utmost importance to both parties, but also because of how essential industry and manufacturing are to the American identity.

What do you think? Is the heyday of US manufacturing and industry behind us? Or will we see a renaissance over the next 50 years?