Tighty whities, boxers, g-strings, boxer briefs, hipsters ... short of going commando, chances are you have some petroleum products below the belt.

Today's undies are a modern invention they come in all shapes, sizes, cuts, and colors. There are even underwear subscription services if that's your thing. But even before cartoon characters, glitter, and bows appeared on intimate apparel, people have been wearing separate bits of clothing down there.

A Brief History of Underwear

Undergarments have a long history, particularly in societies in opposition to complete and total nakedness.

The loincloth is the earliest and simplest form underwear. In cold climates, loincloths were often covered by other garments. In warmer climates, though, it was often the only article of clothing worn (technically making it outerwear instead of underwear, but I digress). There were 3 main types of loincloths: a long strip of material passed between the legs and around the waist; a triangular piece of cloth fastened with strings or loops; and skirt-like cloth wrapped around the hips and fastened with a girdle.

By the Middle Ages, western men's undergarments were more trouser-like. This underwear, called braies, were made of leather, wool, cotton, or linen. They generally hung to either the knees or mid-calf (similar to modern shorts). They laced at both the waist and calf.

By the Renaissance, braies were shortened. They were typically fitted with a front flap that buttoned or tied closed. Eventually, these braies were replaced by simple drawers made from silk, cotton, or linen. These were usually knee-length with a front button flap.

The Industrial Revolution led to the mass production of underwear.

People could now purchase them from stores, rather than make them at home. The invention of water-powered spinning machines, as well as the cotton gin, made cotton a widely-available material that became a common choice for these new mass-produced underwear.

The union suit was patented in 1868 and became a popular undergarment for men, women, and children, although it was originally designed for women. The suit, emancipation union under flannel, " had long arms and legs. It buttoned up the front and had a rear button-up flap, known as the access hatch. "

Union suits were replaced in the 1930s with the invention of briefs. By the 1940s, buttons and ties were replaced with elastic waistbands. In the 1950s and 60s, underwear started to be considered a fashion item and manufacturers began experimenting with bold colors and patterns and newer fabrics, such as spandex.

I don't think it's too far a stretch to say that elastic waistbands and underwear are meant for each other. They're tight, you know? (but not too tight everyone needs a little wiggle room in the waist). It's weird to think of underwear without it. But if the history of underwear has taught us anything, it's that stretchy-waisted underthings have only been around for a small fraction of the undergarment timeline.

The commercialization of rubber played a large role in the invention of elastic-waisted underwear mostly because elastic is made from rubber.

So what exactly is elastic? Essentially, elastic is any textile woven with natural or synthetic rubber. It's a super useful material with great stretch capacity and the ability to return to its natural size post-stretch.

The history of natural rubber is old really old. And practical, commercialized uses for rubber were developed in the 19th century. But it took a long time for rubber to make its way into your undergarments. Why? Because people were happy with their underwear the way it was. And both the rubber and textile industries needed to get their stuff together literally. More effective industrial techniques and more effective industrial practices at the beginning of the 20th century led to elastic-waisted underwear (it just took a few decades). 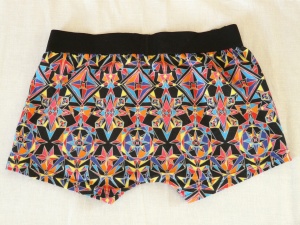 Rubber strands are made in a similar way to rubber bands (which were invented in 1845). Rubber threads are cut from sheets of vulcanized rubber (rather than from tubes like rubber bands) and sent to textile manufacturers who work their magic.

Making usable rubber (thank you, vulcanization!) was a major industrial breakthrough which started a rubber boom. But with the onset of WWII, everyone wanted and needed more rubber (So. Much. Rubber). This demand (and ultimately wartime shortage) led to the next big rubber breakthrough: synthetic, petroleum-derived rubber.

Government-funded R&D led to important synthetic rubbers: butadiene rubber, styrene-butadiene rubber, and ethylene-propylene monomer. However, these guys lacked the flexibility of their natural counterpart. While good for the wear and tear of automobile tires, they weren't so good for, well, wearing.

That is, until two DuPont chemists created a synthetic fiber from polyurethane in 1959. Those fibers? Well, they called them spandex. They marketed their spandex as Lycra intended for ladies' undergarments ( ooh la la!).

Today, spandex has made its way into everything from underwear and swimwear to bras and jeans. And while we're not saying that the popularity of spandex is all thanks to Pat Benatar ...we're definitely not not saying that, either. Hello, 80s rock...