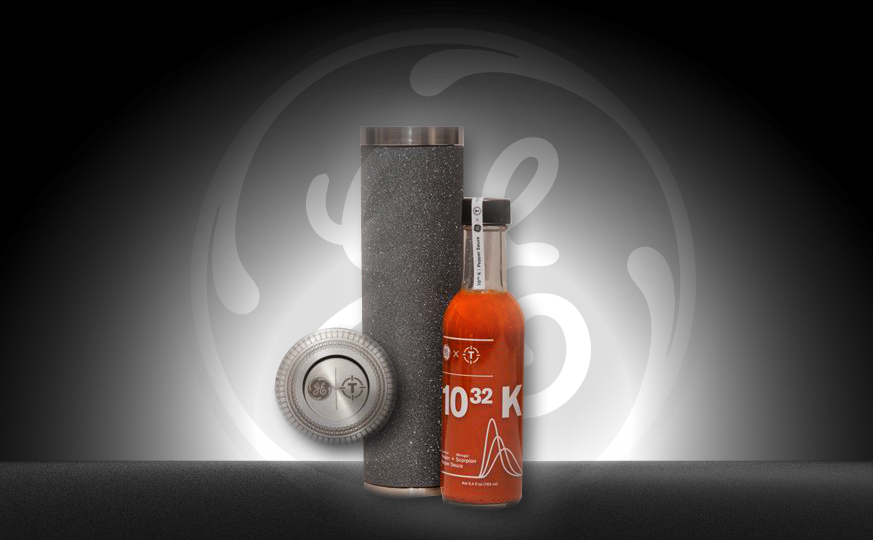 10^32 K (142 nonillion kelvins) is possibly the highest known temperature, according to the standard model of particle physics (theoretically, this temperature could represent the opposite end of the spectrum from absolute zero, as absolute hot).

Particle physics aside, 10^32 K is also the name of GE's new hot sauce.

Yes, you read that right. General Electric, the big name you've seen on your light bulbs, refrigerators, and microwaves, have really heated things up recently with the addition of this condiment to their already impressive repertoire.

Why hot sauce? Why absolute hot?

Bloomberg published an article April 25 on the subject under the notion that the American multinational conglomerate corporation is targeting younger generations (ie. Millennials) to re-frame the perception of their (literally) old image.

Because what's hotter than hot sauce? Not much, apparently. Just ask Hillary Clinton she keeps a bottle of Ninja Squirrel Sriracha Hot Sauce with her wherever she goes, according to TIME.

As you may already know, General Electric has a subsidiary, GE Aviation, which is among the top aircraft engine suppliers. One of the ongoing projects for GE has been to incorporate the benefits of ceramics lightweight, strong, and heat resistant inside machines and their engines (without its pesky tendency to break when hit).

These materials they have been working with are called ceramic matrix composites (CMC) and have now allowed GE engineers to build jet engines that could take planes farther and burn less fuel, " because the parts weigh less than metal and don't need to be air-cooled.

CMC parts are made from silicon carbide ceramic fibers and covered with a thermal barrier coating. GE has utilized this material in its packaging design for their hot sauce: the bottle comes in a silicon carbide super material tube with an actual jet engine part cap made from nickel alloy. The silicon carbide tube can handle ridiculous heat levels (withstanding up to 2400 degrees Fahrenheit, to be precise ...400 degrees hotter than even the most advanced metal alloys), which is a fantastic representation for their hottest of the hot, hot sauce.

So to create interest in GE's high-heat-withstanding materials, they did what only makes sense: they created a really, really, really hot sauce.

If you're of the mindset that it's what on the inside that counts (and you can't be particularly bothered by its rad package design), you won't be disappointed: in keeping with their campaign of absolute hot, this particular hot sauce is, well, hot and saucy.

It's all about the heat

So how do you get a jet engine's worth of heat in a little bottle? It's all about the peppers, and the hotter the better. In this case, GE's sauce uses the spiciest peppers known in existence: Carolina Reaper and Trinidad Moruga Scorpion peppers (which sound terrifying, to be sure).

Just for some frame of reference for how hot these peppers really are, consider the ever popular jalapeno pepper. Jalapenos average around 5,000 Scoville heat units (the subjective spiciness scale for peppers); in comparison, Trinidad moruga scorpion ranges from nearly 600,000 to 2 million SHU and the Carolina Reaper between 1.4 and 2.2 million SHU. Are your taste buds on fire yet?

The $20 bottle of 10^32 K was created in partnership with High River Sauces and was limited to 1,000 bottles. If you're a huge fan of hot sauce and want to get your hand on a bottle (or even just a taste), I'm sorry to say that the product sold out within hours of its availability. However, even if you can't buy a bottle, you can still enter the sweepstakes and try to win a bottle. I impulsively managed to snag a bottle of this scary GE hot sauce right before they sold out, so you can bet your bottom dollar that as soon as I get it, we'll have a follow-up here on IO to let everyone in on what exactly the temperature at which (theoretically) all things start to break down tastes like . . . and what it's like to experience absolute hot.